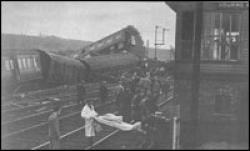 On a clear autumn morning the Perth to Euston overnight passenger train was speeding through Hertfordshire in fine weather, nearing its destination. The train had been delayed en route, and so the driver was attempting to gain time. That driver, a Mr Swaby, was a man noted for his careful approach, but with a shortage of manpower on the railways  WWII had just ended yet a return to normality was still distant  he had been working for 26 straight days. At about four minutes past nine in the morning the express train raced through a crossover point near Bourne End in Hertfordshire at an estimated 60mph; the spot in question had a limit of 20mph. The diversion from the normal route had been adequately signalled, but it is thought through fatigue the driver failed to notice the change, and he may even have fallen asleep on his feet.
Of the 15 coaches pulled by the train all bar three were derailed, many of them tumbling down an embankment between cuttings, a circumstance that added to the death toll. The emergency services reacted rapidly, and a doctor on the train gave immediate assistance where most needed, but some 43 passengers and railway employees died, 38 at the scene and five later. Both driver and fireman perished in the accident. On top of that figure there were 124 injured or severely shocked by the incident.
In an echo down the ages of more recent accidents there was much speculation after the Bourne End disaster that the Automatic Warning System which was in existence but not fitted to the track in question at this time could or would have prevented the accident.

From Susan Moss on 4th March 2011
Im not sure my feedback I just wrote was left as my computer is playing up. Mr Swaby was my Great Uncle and I just want it noted that the family at the time never got over this death, he was a lovely, kind, caring, gentleman and very intelligent and thoughtful and would have never put any one in danger at any time and would have not been speeding. The family thought the reports were all a cover up and were very hurt by it all as my Great Uncle's judgement would not have been the cause of this accident - something else must have happened - I would love to get to the bottom of this story and therefore if anyone has any information, please do not hesitate to contact me. Thank you.