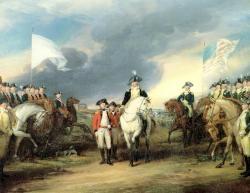 Though the actual surrender at Yorktown came on October 19, Lord Cornwallis and his army had accepted defeat two days earlier, signalled when a drummer led an officer waving a white handkerchief out of the remaining fortifications around the port town. Two days of negotiations resulted in an honourable but still humiliating surrender.
Cornwallis had dug in at Yorktown with his sizeable army of British, Hessian, and American loyalist troops that August, the site chosen for its strategic importance and because it was expected relief would arrive by sea. But in early September the French fleet defeated the British in the Battle of Chesapeake Bay; Cornwallis was trapped, initially by the French army of Lafayette, and soon by George Washington too. The 9000 British were outnumbered more than two-to-one. Relentless bombardment from October 9 by American and French artillery smashed British morale and defences. Cornwallis knew a further relief fleet had sailed from New York, but proved unable to hold out until it arrived  just five days after the surrender on October 19.
Cornwallis peevishly attended neither the negotiations nor the formal surrender, supposedly ill. His sword symbolically presented by a subordinate is still displayed in the White House, marking the significance of the victory for the Continentals. According to legend the British marched out of Yorktown with a band playing the folk ballad The World Turned Upside Down. It had been. The war officially ended two years later with the Treaty of Versailles, but Britain had lost the war and America at Yorktown in 1781.