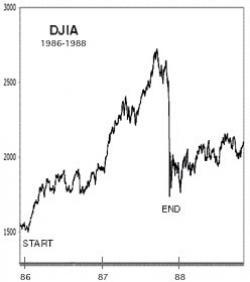 Stock markets are strange creatures. Though the market comprises vast numbers of individual traders and companies, sometimes a gestalt mentality can be discerned. Such was seemingly the case on October 19 1987 when around the world for no readily identifiable reason shares plummeted in value.
The first wave of the crash began in Hong Kong, was magnified in London and other European cities, and grew further in New York. In that single day London shares dropped 10.8 per cent (in fact declining more the next day when a 12.2 per cent decline was registered). By the end of the month the FTSE had fallen by 26.4 per cent.
Nobody can provide a full explanation of the phenomenon. At the time programme trading, that is automatic trading by computers reacting to market inputs, was given the greatest share of the blame. The belief was that self-perpetuating loops had been created, falls in stock prices feeding into their still unsophisticated software to prompt selling and thus further falls and so on. There was also a definite herd mentality, a mindless panic particularly in young traders who over the previous five years had seen nothing but good times as markets rose more than 200 per cent. In simple terms the enormous fall may well have been just a correction, a return to normality rather than fantasy values. But at the time many predicted a worldwide slump, a return to the grim days of the 1930s. The phrase melt-down was heard repeatedly.
Trading in the UK on the day was extraordinary: computers could not cope; back-up systems proved inadequate  smaller traders could not even get through to their brokers by phone as lines jammed, or some were just not answered. And the naive made their personal situations worse by selling in a panic and then re-entering the market when things had picked up, some doubtless re-buying the shares they had sold at bottom once they had recovered to their former levels, which the market as a whole had by 1989.