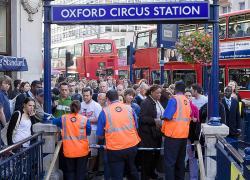 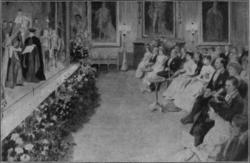 The fire caused seemingly by a discarded cigarette at Oxford Circus tube station caused massive disruption on the day and during the days and weeks following; about 1000 passengers were trapped for a time, and in all 14 people had to be taken to hospital to be treated for smoke inhalation. But the blaze is perhaps more notable for what did not happen after it than what did.
Oxford Circus is one of the busiest, most complex (served by three lines, the Bakerloo, Central and Victoria with a maze of interconnecting tunnels), and most important points on the London Underground network. Once the fire took hold at around 10pm the emergency services and London Underground personnel went into action, but it was perhaps more by luck than thanks to good planning that there were no fatalities: trains had to be backed to safety away from the fire, a slow procedure that meant it was nearly 1am when the last passenger was evacuated. The blaze was only fully extinguished at 3am.
Smoking had already been banned on underground trains in July 1984; this ban was extended to all underground stations; but the mentality of its only a quick one on the way out was not changed for some passengers desperate for a smoke. The report on the Oxford Circus blaze was critical of the precautions taken in case of fires breaking out on the system, and fatefully stated: Luck has a habit of running out. At Kings Cross it did run out just under three years later, on November 18 1987 , when again smokers materials were carelessly discarded, but this time 31 died. It seems few if any lessons were learned from the Oxford Circus event.