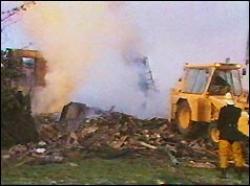 Just after 8am a two-storey block of flats in the Kings Park district of Glasgow was totally demolished by a massive natural gas explosion. Windows were blown out, fireballs jetting from the building just before its collapse. Four members of one family died, along with a neighbour. The cause was sadly predictable  indeed it was exactly the same cause as had led to the Putney tragedy earlier that same year in England when eight died: a 4 gas-main pipe of the old cast-iron type, fractured on this occasion by the action of frost.

Five people were hospitalised, including one very lucky resident who was launched through an upstairs window into the street by the force of the explosion ripping through the block.

Scotland has an unenviable history of such gas explosions, the worst being the 1971 Clarkston Shopping Centre tragedy, also in Glasgow, when 21 people died. The Kings Park blast accelerated the necessary replacement of the older metal pipes with plastic ones far more resistant to frost damage. But further similar tragedies occurred in Edinburgh in 1989 and Larkhall 10 years later.