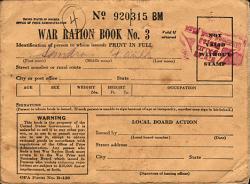 Learning from the error in judgement during the previous conflict, when food stocks got down to dangerous levels before rationing was brought in, the government introduced food rationing only four months into WWII . It was a pity that the dangers of reliance upon imported foods had not been grasped after the Great War ended and political and economic instability once again grew. Some may wonder if we will ever learn the strategic importance of home-grown supplies.
Bacon, butter and sugar were the first three items on the ration, with each household according to the numbers in it given coupons to present with payment for the restricted goods  no coupon no purchase. At the height of rationing butter was down to just 2oz per person, giving rise to situations the wonderful 1960s and 1970s Dads Army sitcom depicted so memorably: Frank, thats your butter ration for the week, says his mother as Pike loads his bread.
After the war rationing got worse, even bread eventually being controlled. The last food items on the list were meat and bacon, no longer rationed as of July 4 1954. And rationing as a whole did not finally end until June 23 1958 , some 13 years after the fighting ceased, when coal was finally put on unrestricted sale.