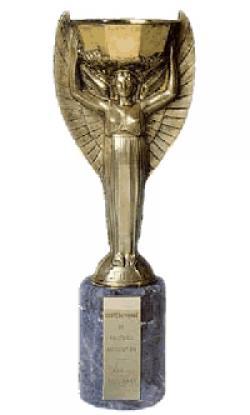 Working to a brilliant plan  walk in to exhibition, pick up Jules Rimet trophy, walk out with it  a thief or thieves got away with the trophy which had been on show at Stampex, a stamp collecting event in Central Hall Westminster. The golden sculpture was even in 1966 said to be worth £30,000, so it was surprising that security measures regarding it amounted to two guards who didnt notice anything happen.
Visitors to the exhibition described a shady looking character seen there at the approximate time of the crime: scar on his face, greasy black hair, thin lips; all that was missing was a bag marked swag and a hooped shirt. Nobody reported him saying: Youll never take me alive coppers, but we can surmise that he did so.
The theft was a national embarrassment with the World Cup in England just months away. A massive police operation was put into action, to zero effect, unless it was to scare the criminals into dumping what they undoubtedly called the gear, which was discovered by a dog called Pickles going walkies in South London (as every pub quiz contestant knows) on March 27. Bobby Moore collected it from the Queen when England beat Germany 4  2 on July 30 to win the tournament.
An interesting footnote: then holders Brazil complained such an outrage could never happen in their football-loving country. It was stolen in Rio in 1983 and never seen again.