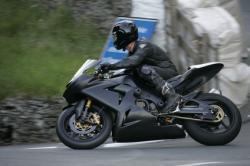 History on 28th May 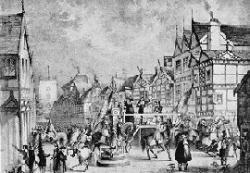 The Isle of Man TT (Time Trial) races for motorbikes began in 1907 partly as the result of shady goings-on in events in Europe, a situation not without irony as the very first winner, Charlie Collier, was disqualified at a later TT for illicit refuelling.
Since 1903 Britain had been starved of speed on the roads, a 20mph limit having been imposed and racing on public highways prohibited. Thus it was that the Isle of Man, where no such limit existed (and where to this day there are unrestricted sections of road) was chosen first for racing touring cars, and then in 1907 for a bike race.
The first course was very different from the modern version, only 15.8 miles long compared to more than three times that now: the circuit began and ended at St Johns , taking in Ballacraine, Kirk Michael, and Peel on the way, the race consisting of 10 laps. The paddock was by a pub, and riders on morning practice runs shared the rough and ready roads with ordinary traffic.
Collier rode a Matchless  his father owned the company - in the single cylinder class, where a fuel consumption of at least 90mpg was required. Controversially he achieved this  just - with the help of pedals. There was a second class for larger twin-cylinder machines, but averaging over 38mph Collier was faster than its winner Rem Fowler who had major mechanical problems and even considered giving up at one point.