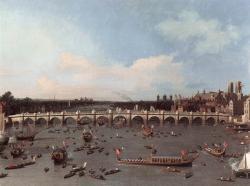 History on 24th May

It is hard to credit now, but in the 17th and early 18th centuries there was great opposition to the building of a bridge at Westminster. This came partly from the City of London, which owned London Bridge , a profitable bottleneck with traffic directed past the shops built upon it; and partly from the watermen who also stood to lose ferry trade. But in 1739 work began on the first Westminster Bridge, which opened in 1750. This version was in poor repair by the start of the 19th century, and was subsiding, so a new one was planned.
The contract for designing the new bridge was given to Thomas Page, a civil engineer who had worked with Brunel on the Thames Tunnel. Page also contracted to build it; his wrought-iron structure enhanced with gothic flourishes by Charles Barry , in keeping with the latters work on the nearby Houses of Parliament. It opened on May 24 1862.
Pages work was highly regarded and he was also entrusted with building Chelsea Bridge. A visionary, he tried to promote the building of a Channel Tunnel more than 100 years before the project was finally launched.
Today the recently refurbished Westminster Bridge is the oldest on the Thames in London: its seven spans link Westminster Abbey and Parliament on the Middlesex bank, and attractions like The London Eye on the Surrey bank, carrying many tens of thousands of commuters and tourists daily.