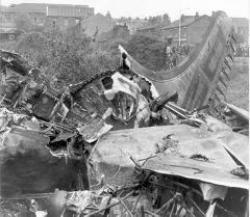 Though our country is a crowded one we still have more open space than built-up areas; that fact, and the skill of pilots, has over the years meant that the nightmare of a large passenger aircraft crashing onto an urban environment has been avoided, with the exception of the 1988 Lockerbie disaster and the Stockport crash in 1967. And in the latter case the pilot apparently still managed to guide his stricken Argonaut aircraft onto a small open space in Hopes Carr, Stockport, miraculously preventing any casualties on the ground.
On the morning of June 4 1967 a British Midland Canadair Argonaut aircraft, chartered by Arrowsmith Holidays, was bringing passengers back to Manchester from Palma de Mallorca. The first landing approach was unsuccessful, the pilot pulling the plane round for a second attempt. Tragically a fault in the fuel system caused the pair of engines on one wing, suddenly starved of fuel, to cut out. The plane plummeted, but the pilot incredibly brought it down on open ground surrounded by buildings.
Of the 84 people on board 72 died: passengers at the front were killed by the impact; horrifically many further back were injured and trapped by the concertinaing of their seats, and died in the ensuing fire. People who raced to the scene rescued 12 from the wreckage before the flames made further efforts impossible.