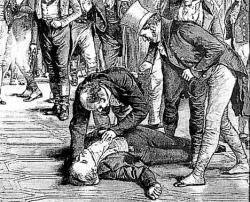 History on 11th May

Given the endless conflicts, both internal and external, with which Britain has been involved since Robert Walpole was the first to hold the office of Prime Minister, it is almost surprising that only one premier has been assassinated. The IRA came close in Brighton in 1984 to killing Margaret Thatcher , but Spencer Perceval remains the only such figure to have fallen victim to an assassin.
The seventh son of an Irish Earl, after a career in the law he entered Parliament in his mid-thirties. He soon served as solicitor and attorney general; and as Chancellor. Perceval became Prime Minister in 1809, the scrupulously incorrupt head of a fragile Tory government.
Perceval was shot through the heart at close range while walking through the lobby of Parliament in the late afternoon. His killer was John Bellingham, a merchant from Liverpool  though born in St Neots - ruined by five years of unjust imprisonment in Russia. He felt the government failed him there; and resented its refusal of compensation.
Bellingham prepared well: he knew the lobby; purchased pistols; had a tailor sew a hidden pocket for them into his coat; and awaited Perceval calmly. Justice was swift: he was tried and found guilty on May 15, and hanged three days later.
Both Percevals and Bellinghams family were subsequently provided for. Perceval died with little more than £100 in the bank; his widow and 12 children were granted £50,000 by Parliament. Public subscription raised considerable funds for his killer's dependents, there being sympathy for a man the system had abandoned.