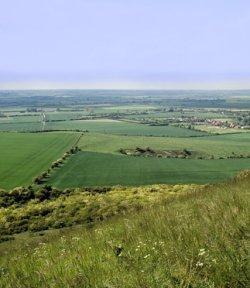 The Chiltern Hills are known locally as just The Chilterns and are a chalk escarpment in the south-east of England, lying a few miles north-west of London . They are part of the chalk ridge that crosses England from Dorset to Yorkshire and stretch 70miles from Luton in Bedfordshire , through Hertfordshire , Buckinghamshire , Oxfordshire and down to Goring in the Thames Valley of Berkshire . There are over 100,000 people living in the area but that doesnt affect the diversity of habitats, the abundance of nature, fine stretches of beech woodland protected by the National Nature Reserves and many prehistoric findings of significance.

A large proportion of the hills is officially designated as an Area of Outstanding Natural Beauty and has been since 1965, with the National Trust having acquired land to preserve the areas character. The peaceful green spaces are available to all with unspoilt chalk hills and valleys (sympathetically quarried to use in cement), impressive beechwoods (previously supplying the furniture industry of Chesham and High Wycombe ) and the many streams and rivers run clear here at their starting point. The highest point of 267 m (876 ft) is at Haddington Hill in Wendover Woods, Buckinghamshire.

There are many ways to spend an enjoyable day out, from picnicking at a stunning viewpoint to visiting one of the areas historic houses . Distributed throughout The Chilterns are a wealth of animal parks , open farms, bluebell woods, breweries , museums , railways , boat trips, charming flint villages and formal gardens . This is an exceptional venue for bird watching, with reservoirs and wetland sites, ancient woodlands and farmed land providing a huge variety of homes for birds including Red Kites and other wildlife. For the more energetic there are over 2000km of routes for cycling, walking and horse riding. There are walks suitable for wheelchairs, gentle strolls or proper hikes and the cycle paths similarly accommodate the short ride or a mountain biking adventure. Horse riding is a great way to explore the hills on a network of bridleways and there are plenty of riding centres to choose from.

The positioning of the hills has dictated the route the railways and roads have taken and due to this settlements have grown up mainly in these regions. Hemel Hempstead with its working canal and the industrial market town of High Wycombe are examples of large settlements in valleys. One of the ancient Roman roads, Icknield Way, follows the line of the hills and did so as the Chiltern Ridge was easily negotiable and quite safe. A major Roman settlement was at Verulamium ( St Albans ), remains of this are present in the city, along with an impressive cathedral .

There is an amazing choice of places to stay with The Chilterns covering such an area. In the 1920s and 1930s, the YHA established several hostels for visitors , there are many hotels , caravan parks , holiday cottages , B&Bs , camping , etc, some of which are pet friendly. There are a wide selection of pubs , inns and restaurants too, with excellent access by road and rail to all the variety of attractions, places of interest, accommodation and eateries.