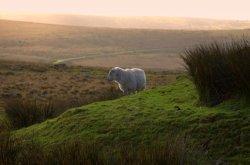 Dartmoor is in the centre of Devon in the South West of England. It is an area of moorland which covers 368 square miles and is protected by National Park status.

The uplands of the moor are granite and there are over 160 exposed Tors, formed by erosion of softer materials around the granite. The highest point on Dartmoor is High Willhays, a Tor which stands 2037 feet above sea level, making it the highest point in Southern England. Much of the land is covered in thick layers of Peat, meaning the rain that falls on the moor soaks in and is distributed slowly, sometimes causing potentially dangerous boggy areas. The moors experience higher levels of rainfall than the surrounding lowlands, resulting in numerous rivers across the moor. The moor takes its name from one of these rivers, the River Dart .

Many prehistoric remains have been found on Dartmoor, dating from the Neolithic and early Bronze Age. Dartmoor has the highest concentration of Bronze Age remains in the United Kingdom, leading to the belief that this was the main period when larger populations moved onto the moor. The acidic nature of the soil has meant that organic remains have not survived, but the hardy granite tools and buildings have been found in abundance.

There are many menhirs (standing stones), stone circles other monuments on the moor, including the Beardown Man, standing 3.5 metres above ground. It is estimated that another metre of stone is buried under the ground. There are about 5000 hut circles surviving on the moors, many had L-Shaped porches to protect from the wind and rain.

There are plenty of myths and legends associated with the moors. They are said to be the home of pixies and many more monstrous creatures, including a headless horseman, a pack of ghostly hounds and a large black dog. The Devil himself is said to have appeared on the moors during the 'Great Thunderstorm' of 1638. A number of writers have been inspired by the mystery of the moors. Sir Arthur Conan Doyle wrote 'The Hound of the Baskervilles' and 'The Adventure of Silver Blaze' based on the moors. Other famous writers, such as Agatha Christie , have also been unable to resist the use of the eerie moor setting.

The moor is a favourite with walkers, offering vast open spaces and breathtaking views. Other popular pastimes include fishing on the many rivers, cycling and pony trekking. It is also a place with lots on offer for the visiting Archaeologist. Those interested in art and crafts can visit places such as the Devon Guild of Craftsmen in Bovey Tracey and the Powdermills Pottery at Postbridge . Bovey Tracey also hosts a Contemporary Craft Fair in June. Fans of Alan Titchmarsh should heed his advice and visit The Garden House at Yelverton or some of the many other gardens that Dartmoor offers, such as Stone Lane Gardens at Chagford .

The moors are traditionally used by the British military for manoeuvres and live firing exercises. This can affect walking areas on the moor and visitors are advised to check before walking in certain areas of the moor. There is an army base at Okehampton , which is also home to The Museum of Dartmoor Life and the Dartmoor Railway Ltd, a restored steam railway.

Dartmoor is also famous for one of its less pleasant landmarks, Dartmoor Prison. Found at Princetown , well into the moor, it was built originally between 1806 and 1809 to house prisoners from the Napoleonic Wars. The prison began to house domestic prisoners from 1851 and for a time housed many of the more serious criminals. More recently, however, it has lost its 'High Security' status and tends to house 'White Collar' criminals.