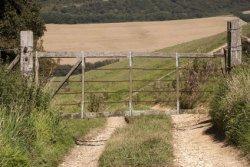 Thomas Hardy was an English novelist and poet who lived from 1840 to 1928. For most of his life he lived in Dorset , the county of his birth. His works feature the fictitious county of Wessex heavily, which is in fact a semi imaginary county based on Dorset itself. The areas of Dorset involved in Hardy's life and works have become collectively known as 'Hardy Country'.

You can also visit the National Trust owned Max Gate . This is a property which Hardy, who had trained as an architect, designed and lived in. 'Jude the Obscure', 'Tess of the D'Urbervilles' and 'The Mayor of Casterbridge' were written at Max Gate.

The D'Urberville family is based on the real life family the Turbervilles, who were Lords of the Manor at Bere Regis (Hardy's 'Kingsbere') in the 13th century. You can visit the church of St John the Baptist at Bere Regis and see the Turbervilles Window, a beautiful stained glass window dedicated to the family. Tess spent the night beneath this window with her mother and siblings after the family were evicted from their cottage at Marlott. The village of Marlott is Hardy's version of the real life village at Marnhull which lies in the Vale of Blackmoor. It's an area worth visiting for its lush rolling hills, as well as the opportunity to relive Hardy's classic novel.

Casterbridge is Hardy's version of Dorchester , the county town of Dorset. The Kings Arms Hotel in Dorchester is a 19th century landmark that is well used in Hardy's novels. The Dorset County Museum on High West Street features a wonderful collection of Hardy memorabilia.

Hardy was very familiar with Puddletown as it was a short walk from Higher Brockhampton. It features in his novels as Weatherbury. The beautiful church of St Mary is where Sergeant Troy spent a rainy night sheltering in the porch after the funeral of Fanny Robin.

There are many tours and walks around Hardy Country. They all showcase the beauty of the region and the allow you to feel as close as possible to the area where Thomas Hardy lived and worked.