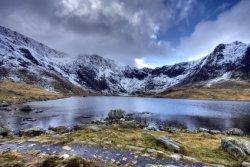 For first time visitors to the region, I thoroughly recommend starting your explorations in the Southern part of Snowdonia using the sleepy fishing town of Barmouth with its 3 miles of clean sandy beaches as a base for daytrips.

Barmouth is on the Western coast of Wales, is easily accessible by train (2 hours from Birmingham ) and is situated about halfway along the Cambrian Coastal Railway, which is famous for outstanding coastal and mountain views as it winds its way along the edge of Cardigan Bay with options to hop onto the narrow guage railway from Portmadog (a bit of an overgrown shopping
centre but a pleasant enough place to visit for an afternoon) to Blaenau Ffestiniog , an old mining town high in the mountains. Barmouth is also easily accessible by car, though to really appreciate it go by motorcycle as North Wales roads are second to none for being in good condition whilst challenging the driver with hills, bends and distracting views.

For walkers and climbers, Barmouth also has the advantage of the bleak, cairn covered Rhinog mountains behind the town and of being across the river from Cader Idris, a 2900 feet mountain range at the most southernmost point of Snowdonia, popular with tourists for being an easy climb as practice for Snowdon itself. Beware though, legend has it that anyone who sleeps on the summit of Cader Idris and survives the night will come down mad or a poet - with a nice comfortable little hut up at the top with fire-making facilities it is a wonder there aren't thousands of mad poets roaming the hills of Wales!

No matter how long one spends in Snowdonia, there never seems to be enough time to see everything. There are romantically crumbling castles such as Criccieth , high on a rocky outcrop, the magnificent castles of Caernarfon and Conwy , remains of roman forts, old caves and slate mines dotted all around, even a power station inside a hollow mountain up near Snowdon itself. The many diverse towns and villages all share the traditional stone
walled and slate roofed cottages and shops but each have a different atmosphere according to whether a castle town, like Harlech , a labryrinth of tiny streets like the market town of Dolgellau , or university town like Bangor with its magnificent views back towards Snowdonia from the Menai Bridge, which links it with Anglesey .

Of course a visit to Snowdonia would not be complete without Snowdon. Despite the name, these days theres rarely much actual snow on Snowdon, though when it does snow there can be drifts up to 3 feet. As a general rule, unless you are an experienced climber, if the trains are not running, do not attempt to reach the summit on foot. On a good day allow 4 hours to
climb to the top though most people take the Snowdon Mountain Railway from Llanberis to the summit of Snowdon, have a hot drink at the top in the restaurant, then walk down, which takes about 2 hours.