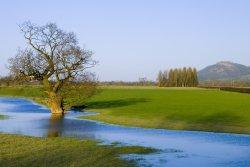 Visitors to the Welsh Marches could be forgiven for simply not knowing where to begin their journey of exploration, for this fascinating area has so much to offer in terms of beauty, history, landscape, gastronomy, festivals and outdoor activities.
Back in the 6th Century, King Offa of Mercia created Offas Dyke, a great earthwork which formed a barricade in turbulent times, stretching some 285 kms. (177 miles) from the Cathedral City of Chester in the north with its Roman origins, to Chepstow with its castle and famous racecourse in the south.
The Dyke was designed to protect England from the marauding Welsh and in the 11th Century, King William I created the Lordships of the Marches. Today, this area is known collectively as the Welsh Marches (the derivation of the word March being from the Anglo-Saxon mearc, meaning boundary) and has the greatest concentration of motte-and-bailey Castles along its length.
Running parallel to Offas Dyke is the A49 road, providing easy access to the hills and valleys carved out by the meltwaters of the Great Ice Age. Flora and fauna flourish in wild woodland and beside the sparkling waters of the rivers Teme and Corve. Combined, these features provide the discerning visitor with a cornucopia of visual and sensual delights throughout the changing seasons.
Central to the Welsh Marches is the medieval market town of Ludlow with its Castle, (once the administrative seat of Wales, and a Grade I listed historic monument), the 15th Century Church of St. Laurence , considered by many as a jewel in the towns architectural crown and the famed Jacobean Feathers Hotel , just three of the 500 listed buildings to be found in the town.
Founded in 1086, Ludlow Castle , with its stone curtain of inner courtyard and square towers is no dry museological example of medieval architecture. Its a living entity in almost daily use, hosting special events such as the annual production of Shakespeare , and for two weeks in July, the town pulses with visitors to the Ludlow Festival . A brief look at the special events calendar will confirm that this is a living market town, famous for its gastronomic delights with locally-sourced produce, first-class accommodation, Michelin-starred restaurants, and medieval Christmas Fayre .
Ludlow, surrounded by the hills of Shropshire and North Hereford is an ideal base for the visitor. To the south-west, and a must for book-lovers is the fascinating town of Hay-on-Wye with its many bookshops and annual literary festival , and to the east and north east of Ludlow, walkers will find the hills of Clee and Clun.
Incorporated in the borderlands are the major towns of Shrewsbury , and Hereford , whose magnificent Cathedral houses the world-famous Mappa Mundi and Chained Library. Herefordshire is a beautiful county, renowned for its cider , the River Wye (enjoyed by fishermen and nature lovers) and its acclaimed Black and White Trail, providing architectural interest for visitors. And for garden-lovers, there are picturesque gardens which include The Weir, and Brobury House, Bredwardine.
Also within the Welsh Marches, cyclists can find long and short distance routes, including the Jack Mytton Way, and Hopton Wood Mountain Bike Trail near Bucknell, which provides 20 miles of woodland tracts to suit all abilities and if riding is your passion, there are miles of bridleways in superb countryside, with accommodation provided for visiting riders and horses.
For specialist activities, why not try ballooning, gliding, rock-climbing or walking on clearly-marked trails. Also with the family in mind, visitor attractions include Acton Scott Historic Working Farm (situated off the A49 near Church Stretton) and the Shropshire Hills Discovery Centre , seven miles north of Ludlow at Craven Arms . But if you prefer something more sedate, simply wallow in the beautiful vistas from the hills of South Shropshire, try boating along the border on the Montgomery canal, or fish the clear waters of the rivers which wend their way through the tranquil valleys.
Further exploration along the A49 will reveal Shrewsbury with its Castle , originally built by the Norman Marcher Lord, Roger de Montgomerie (modernised by Thomas Telford in 1786) and the Shropshire Regimental Museum. Today, Shrewsbury is no longer a defensive site but a bustling market town which, whilst retaining its charm and history, offers modern shops and facilities. (A famous son of Shrewsbury was Charles Darwin whose Centenary will be celebrated in 2009).
Further north on the A49, the scenery changes as you see the hills of Haughmond Grinshill (source of the Shrewsbury Library stone). To the east of the road, the ridge of red sandstone is home to Hawkstone Park and follies, a unique 18th Century fantasy of caves, cliffs, bridges and woodland walks and for the fit, climb 152 steps to see 13 counties!
Situated just off the A49 is the heritage centre in Whitchurch , a town with roman origins. It is well known for its local produce, and J.B. Joyce, Clockmaker was established there in 1690.
Splendid National Trust properties and gardens are to be found near the borders of Herefordshire, Shropshire and Wales with guided tours offered at Bishops Castle , and Church Stretton . And why not visit the 13th Century manor house of Stokesay and Berrington Hall , a late 18th Century house designed by Henry Holland with gardens by Lancelot Capability Brown , and Croft Castle with its 1000 years of history.
Visitors to the Welsh Marches cannot fail to be entranced, and with sustainable ecology in mind, are encouraged to buy local produce and to consider travelling through this beautiful countryside by train and shuttle bus services which operate regularly.
But, however you choose to explore the Welsh Marches, you are certain to enjoy all that is offered; time, after time, after time.