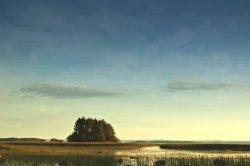 The Fens were once an area of wetlands in the eastern part of England, they are also known as the Fenland. They cover an area from the coast of The Wash right through to the historic counties of Cambridgeshire , Huntingdonshire , Lincolnshire , Norfolk , Northamptonshire and Suffolk . The Fens were virtually all drained by the end of the nineteenth century.

Today The Fens have their own unique atmosphere and character. The land has its special history and offers something different. The Fens encompass nearly 1 million acres of beautiful black soil and wildlife-rich water. They are full of history and heritage as well as flowers, horticulture, water and wildlife.

There are a number of towns and villages worth a visit in The Fens district. One example is the town of Boston , whose most notable landmark is The Stump , the parish church with the highest tower in England, visible for miles. Emigrants sailing from Boston gave its name to Boston, Massachusetts, of the United States.

Chatteris is a market town in The Fens, reputed to be the last refuge of Boudicca, the Iceni Queen who led an uprising against the Romans . The historic cathedral city of Ely has many beautiful and historic buildings, most notable the cathedral itself, considered one of the seven wonders of the medieval world.

March is another market town in the Fenland, which is now the administrative centre of the Fenland District Council. March is home to St Wendreda's church , notable for its magnificent double-hammer beam roof with 120 carved angels.

The market town of Spalding is the administrative centre of the South Holland district of Lincolnshire and is famous for annual Flower Parade . The town also holds a Pumpkin Festival in October, though this is not connected with Halloween.

Whittlesey is an ancient market town connected historically to Peterborough by The Fen Causeway, a Roman road built around 1 AD. Whittlesey may be the only place in England still celebrating the Festival of the Straw Bear , which was an ancient custom in many English towns, since it was resurrected in the town in 1980. Starting on Plough Monday one of the locals is outfitted head to foot in straw and dances from house to house for gifts of money or food, but especially beer. In days gone by the festival was of such importance that farmers would reserve their best straw for the making of the bear.

Last but not least amongst the Fenland towns and villages is Wisbech , known as the capital of the Fens.