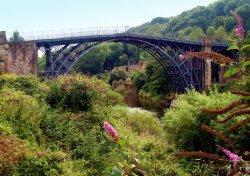 It seems incongruous that Shropshire , the county of the ancient and magnificent Ludlow Castle , and in literature the home of the gentle Lord Emsworth and the Empress of Blandings, (a side of the county perhaps best demonstrated by places like Haughton Hall , now a country house hotel a few miles east of Ironbridge) should also house the birthplace of the industrial revolution - Ironbridge in Shropshires Severn Gorge.
Local coal deposits combined with the genius of Abraham Darby who pioneered iron production using coke to give the world cheap cast iron. And his grandson of the same name then advanced civil engineering by using it to build a bridge spanning the gorge. That iron bridge became the symbol of the new industrial age, its significance underlined by the award of UNESCO World Heritage Site status in 1986.
Visitors will want to walk across the iron bridge itself, a rather elegant structure. While concentrating on the bridge it would be foolish not to enjoy the beauty of the Severn Gorge, cut deep into the East Shropshire hills, and the delightful country nearby  the market town of Much Wenlock is a lovely contrast to Ironbridge, its 17th century coaching inn The Gaskell Arms belonging to another era; and to the north Wrockwardine, where the Church Farm Guest House gives superb views over this pretty county. And the town of Ironbridge is well worth exploring, with cottages on the hills pre-dating the 1781 opening of the bridge; sturdy foursquare Georgian houses  one now The Best Western Valley Hotel , another the accommodation for The Meadow Inn - demonstrating the growth in that period; and typically practical Victorian brick construction like The Coalbrookdale Inn overlooking the Ironbridge.
Although a days visit to Ironbridge is to be encouraged, it would not be possible to visit all the attractions in this relatively small area in just one day. There are 10 museums and many more historic sites here. Those with an interest in art and industry will be drawn to The Coalport China Museum and the Jackfield Tile Museum. If you have kids to keep amused two sites in particular must be on the list: Blists Hill Victorian Town, where actors bring past times to life (and the sweet shop brings parental schooldays back too); and Enginuity, for descriptions of which the words hands-on are inevitable, with loads of activities to broaden the mind and the smile.
This has been a tourist destination since the bridge was built  the Tontine Hotel at one end was put up by the bridge company to cater for visitors just three years after the river was spanned  and the town though only small with a permanent population of about 2,500 has facilities to make a stay of whatever length easy and enjoyable.