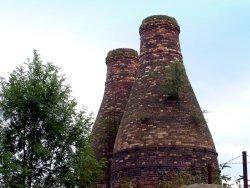 The Potteries - essentially the city of Stoke-on-Trent and its environs - are known throughout Britain and beyond for fine china, forever associated with the two Josiahs, Wedgwood and Spode. But the area has much more than that to offer visitors.
Though Stoke did not gain city status until the 20th century, its finest era was probably from the late Georgian times and through Victoria 's reign. A good feel for those days can be gained with a trip to the Etruria Industrial Museum , standing at the heart of the canal system that once served the booming pottery industry, or for an artier viewpoint try the Potteries Museum and Art Gallery in the city centre.
Accommodation with the architecture to match that heyday is available all over the city: Haydon House Hotel in Basford, with the elegance of the late Victorian period; North Stafford Hotel opposite Stoke's railway station, a grand structure typical of that confident commercial epoch; or Longton's Crown Hotel , once a coaching inn and still a well-known local watering hole.
A visit to Stoke would not be complete without some potted history. Both Wedgwood and Spode have excellent visitor centres, and of course factory shops (of which there are more than 40 in the city), but there are many more worth a detour: Portmeirion ; Moorcroft with a characteristic bottle oven; Burleigh , a working Victorian pottery which can be visited by arrangement, the list goes on.
Alton Towers is of course just a few miles away, but not strictly in the Potteries. For those wanting some thrills and splashes there is a choice in Stoke: the indoor Cariba Creek Waterpark in Stoke itself, located with the Splash Landings Hotel ; and Waterworld in Etruria, with more than 30 rides to enjoy.
Trentham Gardens south of the city is a destination in itself, recently improved and expanded, though the lake Capability Brown worked his magic on remains with rowboats and cruises on offer. With magnificent Italian gardens, barefoot gardens, busy monkey area and peaceful country walks Trentham could easily take up more than one day of any trip.
North Staffordshire has some lovely countryside offering a contrast to the busy city. Just east of Stoke is Blythe Bridge, where The Foxfield Railway can be found, with steam engines and a history linked to the region's coal mines. The more rural face of the area can be enjoyed with stays in country house hotels like The Manor House Hotel in Alsager, north west of Stoke; or old coaching stops like The George Inn located in pretty Eccleshall south of the city; or how about self-catering in a converted barn like Highfields Farm near Stone ; or a grade II listed farmhouse, Ribden Farm in Oakamoor between Stoke and the Staffordshire Moorlands?
The Potteries is a great place to stay, and it even has its own language - don't be worried if you are called duck, it's friendly, and culinary delight - the Staffordshire oatcake . Give it a go!