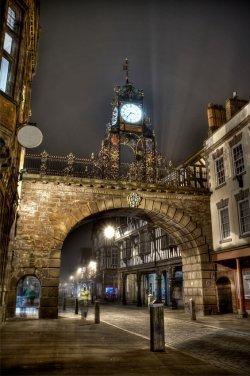 Chester lies on a wide bend of the River Dee in the North West of England, close to the border with Wales and around 32 miles from Manchester . Probably most famous as a Roman Walled City there is still much of the Roman remains left to attract visitors worldwide. Whilst Chester lies at the Western extreme of the County the City remains the administrative centre for Cheshire .

The City of Chester houses a modest population of around 120,000 people but particularly during the summer months and in the period before Christmas visitors can swell the local population to around half a million.

Historically Chester missed out on the Industrial Revolution as it was by that time no longer an important port or the site of raw materials, however Chester has always been a popular market place for produce grown in the surrounding area and secondly for the goods and services that the City provided by the City traders. Today as a County Town it is hardly surprising that many professional practices including law firms, auctioneers and accountants thrive and contribute to the Citys growth.

Chester benefits from a well developed retail sector which is concentrated in the historic City centre. What adds to the character of this City are the unique Chester Rows  these are a system of walkways that form continuous covered galleries running above the shops at street level. They are seen in all four main streets in the City Centre so there are shops at two levels. Originally they can be traced back to the late 13th / early 14th century and have been re-built and altered over the intervening centuries.

Chester has a great deal more to offer than shopping, throughout the in the surrounding villages there are numerous bars and restaurants as well as hotels to suit every pocket. There is a particularly varied pub, club and restaurant scene within the City which ranges from lively student bars where there is often live music to some of the best five star restaurants to be found in the UK.

A range of cultural and leisure pursuits are catered for within the City or just outside it. There are two multiplex cinemas within a few minutes drive of the City as well as two theatres and other venues where live entertainment is provided.

The history of Chester can be traced through the three museums and visitor centres within the City walls and there are boat trips on the River Dee with jazz cruises in the evening as well as the Zoological Gardens which is a particular attraction through the summer months.

There are regular race meetings through the summer at the Roodee, Chesters Race Course which lies between the City Walls and the River Dee. The prestigious May meeting, when both the Chester Vase and Chester Cup are contested is one of the foremost dates in the County racing calendar attracting huge crowds.