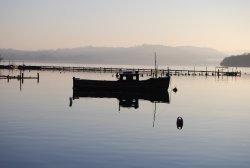 For such a wee country, spanning a mere 275 miles from top to bottom, and just over 150 miles east to west, Scotland has over 6,000 miles of coastline to discover. Remarkable, and its all thanks to the 790 islands that stud its coastline.
Of these islands, fewer than 100 are inhabited, and only fourteen can boast a population in excess of 1,000. To Scotlands north-east, the Orkney and Shetland Isles stretch out towards Scandinavia; on its north-west shoulder, standing guard in the Atlantic, are the Inner and Outer Hebrides. All are rich in history and culture. Some have been inhabited since Mesolithic times, some are of great geological interest, but all share a rugged, unspoiled charm, and a sense that humans are hugely outnumbered by great colonies of seabirds. Scotlands islands are the perfect place to shelter from the pace of modern living.
Among the most accessible are the Inner Hebrides. From Oban , a short 45-minute steam on a ferry will reach the Isle of Mull . Its an island adored by geologists for its basalt structure, sitting on top of rocks which 2000 million years ago would have been found somewhere near the equator. Mankinds history on Mull is some-what more recent, but stretches way back to the Ice Age of 6500 to 3000BC. After the thaw, Mesolithic man settled on the island, and the history of civilisation on the island can be traced through the Neolithic, Bronze and Iron Ages. It wasnt until the 5th Century that Christianity was introduced to Mull by St. Columba in 563AD, after he arrived from Ireland, by way of neighbouring Iona. By the late 8th Century, it was the Vikings who came raiding.
These days, Mull is regularly visited, but reassuringly, pillaging is unheard of  the cawing of gulls is the only battle cry to be heard. Over 250 different species of bird call it home, including the White-tailed Eagle. Otters, porpoises, minke whales, and dolphins, all make their home in the Sea of the Hebrides. Whale watching is one of the many reasons to visit Mull, and there are a number of local operators running sight-seeing trips around the island. There is plenty of accommodation to be had. Mulls most prominent town, Tobermory , is instantly recognisable for the pastel coloured buildings of its idyllic sea-front, and is a wonderful base from where to explore the island  and, of course, to gorge yourself on the freshest Hebridean sea food the Hebrides. Younger readers may recognise it from the television series Balamory.

Ben More, standing at 966 metres above sea level, is the islands highest point, and looks over the Ross Of Mull. Drivers are rewarded for keeping their nerve on the peninsulas single-track roads with wonderful views and the most ideal settings of Kinloch and Carsaig . After all that exploring, you will have earned your nightcap. As with all of the Hebridean Islands, Mull offers wonderful vistas for photographers, and a population of just over 2,500, means that it's not hard to find some peace and quiet.
To the south of Mull lie Jura and Islay: both islands famous for their malt whisky. Jura is more sparsely populated than Islay, and is recognisable from its triumvirate of quartzite mountains known as the Paps of Jura. On a clear day, their prominent peaks can be seen from Northern Ireland. An inspiring sight? George Orwell reportedly finished 1984 on Jura  though mercifully there are no CCTV cameras bolted onto the mountainside.
Islay , regarded as the Queen of the Hebrides, is another island where humans are very much the minority  its tranquil machair landscape is home to colonies of barnacle geese in winter, and chough, hen harrier, oys-tercatcher and cormorant all year round. Like, Mull, Islay has a long history, stretching all the way back to 10,800BC  the oldest civilisation yet discovered in Scotland. Before Scotlands sovereignty spread to the Isles, Islay was part of the Gaelic kingdom of Dàl Riata, encompassing many of Scotlands Western Isles and County Antrim in Ireland. Again, like Mull, the Vikings arrival in the 9th Century ceded the Gaels rule, as Ketil Flatnose came to conquer the Hebrides and Isle Of Man.
History aside, if the world ended tomorrow, Islay would be remembered for the whiskey produced in its eight distilleries. Ardbeg , Lagavulin, Laphroiag and Caol Isla produce the most peaty drams, medicinal and strongly perfumed; while Bowmore , Bruichladdich, Bunnahabhain and Kilchoman producing slightly less challenging whiskies. Islays Jazz Festival , and the less than abstemious hoe-down of the Malt and Music Festival are great excuses to have a wee dram. Aside from the whiskey, Islays many lochs offer excellent brown trout fishing and those seeking deliverance from temptation can visit Kilarrow Church, Bowmore , its circular construction is said to offer the devil no hiding place.

Venturing south of Islay, tucked into the Firth Of Clyde, lies the Isle of Arran . Much loved by beer drinkers, whisky lovers, and more sober characters such as geologists and hillwalkers; Arran is a popular holiday destination, that has as much in common with its Hebridean cousins as it does with its neighbouring mainland. Accessible by ferry from Ardrossan , Ayrshire, and Claonaig, Argyll , Arran lies between Kintyre to the north and Ayrshire to the south. Like the Hebrides, Arran has a unique prehistoric geology, with all manner of dykes, cists and sedimentary rocks to bring geologists to an enthusiastic froth. Arran sits on the Highland Boundary Fault, and is divided into highlands to the north, and lowlands to the south  much like Scotland.
Arrans main settlement is Brodick . Once the seat of the Dukes Of Hamilton, the imposing Brodick Castle is now maintained by the National Trust for Scotland, and is a focal point for the islands tourism. Accommodation is plentiful on an island, and visitors are no doubt attracted by Arrans unspoiled moorland, and forestry. Lamlash Bay will soon be the site of Scotlands first marine conservation area, and a portion of the bay will be made a No Take Zone. The bay is an important breeding ground for shellfish, in particular scallops, and a fishing ban is hoped to help restore the marine biodiversity throughout the Firth of Clyde, boosting fish stocks and providing a template for future conservation exercises throughout the country.
Perhaps the most iconic of Scotlands islands is the Isle of Skye . Immortalised in verse and song, Skye is the most northerly of the Hebrides, lying just to the west of the port of Mallaig , where the car ferry can be taken to Armadale. Skye has a mythical aura, enhanced by history and sustained by its wonderful sense of isolation. Scotlands second largest island, (Lewis and Harris to the South being the largest), is truly a product of its environment, with glacial movement and the Atlantic Ocean carving valleys, and sculpting the island into peninsulas.
Skyes largest town is the sheltered harbour settlement of Portree , where fishing boats find some solace from the punishing conditions at sea. The Cuillin ranges dominate Skyes landscape; twelve munroes are found in the basalt and gabbro of the Black Cuillin range. The more fearless and experienced mountaineer may find the company of Golden Eagles while scaling the unforgiving rock; lesser mortals  the sensible  may fancy a less endangering walk around the Red Cuillins. Totternish to the immediate north of Portree offers some spectacular walks along the escarpment, and to the south, The Braes are even more suited to an afternoons constitutional. Be sure to keep an eye out for red deer and sea eagles, and of course, be sure to check the weather forecast before heading out.

The restorative powers of Skye know no end: the Talisker Distillery, by Loch Harport on the islands West Coast, produces a magnificent single malt of the same name, and the Isle Of Skye Brewery Company produce some of Scotlands finest real ales  some crafted from roasted porridge oats. You can eat very well on Skye. The Three Chimneys , Dunvegan, is a five-star guest house with a restaurant that has built a formidable repu-tation for food that champions the freshest of local produce. The nearby Dunvegan Castle has been the seat of the Clan MacCleod for 800 years, and standing firm through famine and strife, it offers a panoramic insight into the history of the area, from famine and rebellion and all in between.