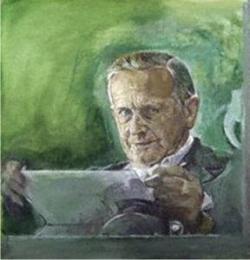 Born in London on August 24th 1903, Graham Sutherland did not begin his painting career until his mid thirties having previously studied engraving at Goldsmiths College and supported himself by teaching art. His early paintings were mainly landscapes inspired by the inherent strangeness of natural forms and tending towards abstraction. Their affinity with surrealism led to his inclusion in the 1936 International Surrealist Exhibition in London. Sutherlands work has been linked with contemporary British artists such as Paul Nash, John Piper and Francis Bacon. For several years Bacon and Sutherland often exhibited together and explored related areas of interest.

During World War II Graham Sutherland worked as an official war artist and following the war produced The Crucifixion (1946) for St Matthews Church Northampton. In 1926 Sutherland had converted to Catholicism and much of his work until his death has a religious theme. One of his largest and most well known works is his tapestry for the rebuilt Coventry Cathedral, Christ in Glory commissioned in 1952.

The post war years led to increasing recognition of Sutherlands work. In 1946 he had his first one-man exhibition in New York at the Buchholz Gallery. He was chosen to represent British art in the Venice Biennale of 1952 and also undertook several prestigious portrait commissions. Perhaps the best known of these is his 1949 portrait of Somerset Maugham. His portrait of Winston Churchill (1954) was less well received and was destroyed on the orders of Lady Churchill.

In 1977 the National Portrait Gallery organised a retrospective of his portraits. Graham Sutherland died on 17th February 1980 in London.

From Sanjay on 5th May 2009
Studied at Goldsmiths College School of Art. Worked mainly as an etcher until 1930 before painting abstract landscapes. Official war artist from 1941 to 1945. Produced several well known portraits including Somerset Maugham and Winston Churchill (destroyed by Lady Churchill). Also designed ceramics, posters and textiles

Contributors: Do you have a site related to Graham Sutherland?
Supply some content for this page and we will gladly add a link to your site. Email here.