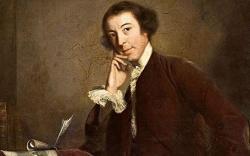 'We often repent of our first t'... More

Horace Walpole, who coined the term serendipity, is best known as the original Gothic revivalist. Horatio Horace Walpole was born in London on September 24 1717. As the 4th Earl of Orford he was the son of the Prime Minister Sir Robert Walpole, and cousin to Lord Nelson.

Walpole was educated at Eton and Kings College Cambridge. In March 1739 he set out for the Grand Tour with the poet Thomas Gray but they fell out; it may have been a lovers tiff. On returning separately to England in 1741 Walpole discovered he had been elected MP for Callington in Cornwall while he was away.

In 1747 Walpole moved to Twickenham and began to turn his house, Strawberry Hill, into the first Gothic revival house in England. This was many years before the style became a Victorian staple and he was to continue work on Strawberry Hill for 25 years. Walpole also wrote the first Gothic novel The Castle of Otranto (1764) which was to have many imitators.

Walpole was also party to the death of the boy-poet Chatterton (1770). The youth sent Walpole some of his forgeries purporting to be by a 15th century monk which, when they were exposed, led to his presumed suicide. Walpole was blamed by many, including Wordsworth and Keats, enduring personal remorse and public vilification. In 1776 he was to write: This world is a comedy for those that think and a tragedy for those that feel.

Although he wrote several memoirs it is Walpoles letters which provide the best account of his life and times. They were written with a view to publication and today over 4000 survive. Between 1937- 83 they were collected into a 48 volume edition; an invaluable primary source for historians. Horace Walpole died on March 2, 1797.

Contributors: Do you have a site related to Horace Walpole?
Supply some content for this page and we will gladly add a link to your site. Email here.