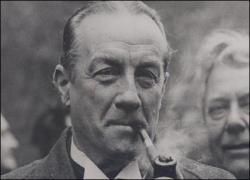 'You will find in politics that'... More

Three times Prime Minister, Stanley Baldwin was a key figure in British politics during the inter-war years. Popularly portrayed as the man you can trust, history has judged him less favorably particularly as regards his unwillingness to confront the growing Nazi menace during the thirties.

Born August 3, 1867 in Bewdley, Worcester, Stanley Baldwin was educated at Harrow and Cambridge where he gained an undistinguished third class degree. Returning to his fathers business of iron manufacturing he proved an adept businessman and modernizer. Following the death of his father in 1908 Baldwin took his place as Conservative MP for Bewdley, rising to be a Parliamentary Private Secretary during WWI. His attack on the wartime coalition government of Lloyd George brought him to prominence and helped gain him the post of Chancellor of the Exchequer in 1922.

With the resignation of the Conservative leader Bonar Law in 1923 Baldwin was the surprising choice for his successor. His first tenure as Prime Minister was short lived after he called and lost a general election over the issue of tariff reform. Returning in 1924 he remained in power until 1929, presiding over rising unemployment, the return to the gold standard and the general strike. Back in power in 1935  though he had served in Ramsay MacDonalds coalition government - he more or less successfully handled the abdication of Edward VIII, judging as always the prevailing mood of the country. In 1937, following the coronation of George VI, Stanley Baldwin retired from politics, his image intact. His popularity was short lived for with the failure of appeasement it was Baldwins disarmament policies which were held responsible for Britains unreadiness for war in 1939. Stanley Baldwin died at Astley Hall in Worcestershire on December 14, 1947.

Contributors: Do you have a site related to Stanley Baldwin?
Supply some content for this page and we will gladly add a link to your site. Email here.