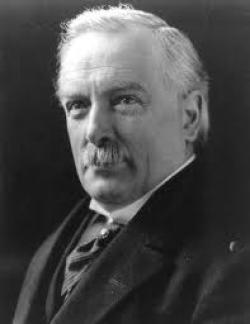 Born in Manchester, Greater Manchester
Born on 17th of January 1863
Died in Llanystumdwy, North Wales
Died on 26th of March 1945

'There is nothing so fatal to c'... More

David Lloyd George was born 17th January 1863 and died 26th March 1945. He was one of the great reforming British statesman of the 20th century and Prime Minister from 1916 to 1922. He was born in Manchester, the son of schoolteacher, William George and his wife, Elizabeth, but was Welsh by descent and grew up in Llanystumdwy, North Wales, with his mother after his father died when he was just over a year old. Influenced and encouraged by his Welsh Liberal uncle, Lloyd George qualified as a solicitor and set up practice in the back parlour of his uncle's house in 1885. In January 1888, he married Margaret Owen, the daughter of a wealthy local farming family, and they had 5 children. She died in 1941 and Lloyd George later married his secretary, Frances Stevenson, at the age of 80 in 1943. In 1890 he was elected Liberal Member of Parliament for Caernarvon until 1945. He became a lifelong Welsh nationalist, and was known for his radicalism, earning notoriety for his campaign for disestablishment of the Church of England and his opposition to the second Boer War. In 1906, the Prime Minister, Sir Henry Campbell-Bannerman, appointed Lloyd George as president of the Board of Trade where his main achievement was stopping a proposed national strike of the railway unions by brokering a deal between the unions and the railway companies. In 1908 he was named Chancellor of the Exchequer in the government of H.H. Asquith. His 1909 budget was called the 'people's budget' since it provided for social insurance that was to be partly financed by land and income taxes. The budget was rejected by the House of Lords, which in turn led directly to the Parliament Act of 1911 by which the Lords lost their power of veto. Lloyd George remained Chancellor of the Exchequer through the early years of World War I, and in 1915 he was appointed Minister of Munitions. He became Secretary of State for War in 1916 and was increasingly critical of Asquith, the Prime Minister. In December 1916, with the support of Conservative and Labour leaders from Asquith's coalition government, Lloyd George replaced Asquith as Prime Minister. Lloyd George's achievements in the last two years of the First World War included persuading the Royal Navy to introduce the convoy system, and the unification of the Allied military command under the French general, Ferdinand Foch. At the successful conclusion of the war, Lloyd George was re-elected Prime Minister and was Britain's chief delegate to the Paris Peace Conference that drafted the Versailles Treaty. In 1921 he secured the settlement that established the Irish Free State. However, in the summer of 1922 he was involved in a scandal that concerned the selling of knighthoods and peerages, and in October the Conservatives withdrew from the coalition government as they opposed Britain's foreign policy on Turkey, and Lloyd George then resigned as Prime Minister. He remained in parliament but was marginalised politically, being frequently predicted to return to office but never succeeding. In 1926 he took over from Asquith as Liberal leader and in 1929 became Father of the House, the longest serving member of the commons. In the late 1930s Lloyd George was sent by the British government to try to dissuade Adolf Hitler from his plans of Europe-wide expansion, and paved the way for Churchill as Prime Minister. His last vote in the House of Commons was in February 1943 in defence of the welfare state, which he had helped to create. In 1944 he and his wife Frances returned to Wales and in 1945 he was made Earl Lloyd George of Dwyfor and Viscount Gwynedd. He died in March 1945 without ever taking up his seat in the House of Lords, and was buried beside the River Dwyfor in Llanystumdwy.

Contributors: Do you have a site related to David Lloyd George?
Supply some content for this page and we will gladly add a link to your site. Email here.