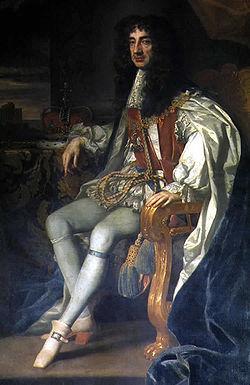 Charles II was born on the 29th May 1630, at St James Palace in London, his father was Charles I, and his mother was Henrietta Maria Of France. His childhood was interesting, he had accompanied his father and spent his teenage years fighting during the Civil War and was with his father at the Battle of Edgehill. Charles I was captured which resulted in his father being executed at Whitehall on the 30th January 1649, after he had been tried for high treason, Charles had been abroad in the Netherlands when he leant of his father's execution.

He became King Of Scotland on the 5th February 1649, and his Coronation took place in Scone in Scotland on the 1st January 1651. Charles had suffered defeat in the battle of Worcester and he fled to France, where he was to remain for several years in exile. He had not been declared King Of England by Parliament, instead Oliver Cromwell was placed in power as Protectorate, which resulted in him ruling with rigid social and religious laws, over England, Scotland and Ireland. On Cromwell's death, after an unsuccessful attempt by his son to carry on as Lord Protector, Charles was eventually contacted and he was asked to return to accept the crown, which he did in May 1660. His Coronation occurred on the 23rd April 1661 at Westminster Abbey in London when he finally became king of England, and Ireland.

He married Catherine of Braganza, a Portuguese Princess in 1662 at a ceremony in Portsmouth, they produced no living heirs, although Charles did have many children by several mistresses. Charles II reign was to go through troublesome times, and he saw the Great Plague Of London in 1665, although he left London and fled to Salisbury, a War with the Dutch in which England saw defeat, the Great Fire of London in 1666, and the building of St Paul's Cathedral by Christopher Wren.

Charles died in February 1685 at the age of 54 years, at Whitehall Palace, he lay in state, until his funeral on the 14th February 1685 when he was buried at Westminster Abbey. He was succeeded by his brother James II of England and Ireland, and James VII of Scotland.

Contributors: Do you have a site related to Charles II?
Supply some content for this page and we will gladly add a link to your site. Email here.