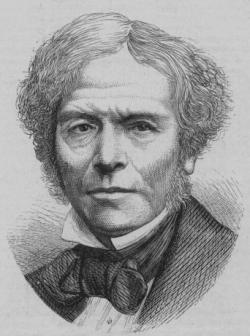 Born in Southwark, London
Born on 22nd of September 1791
Died in Hampton Court, Surrey
Died on 25th of August 1867

'The important thing is to know'... More

Faradays research experiments into electricity place him at the pinnacle of science. Today his concepts concerning a field based on lines of force have become one of the main underpinnings of theoretical physics.

Michael Faraday was born in Southwark, South London on September 22, 1791, the son of a blacksmith his lowly origins meant he had to educate himself. In this he was helped by his early employment as a bookbinders apprentice. Here he had access to scientific texts which he absorbed over the next seven years. Aged 20, he attended lectures by Sir Humphrey Davy to whom he wrote, eventually being offered a position as a chemical assistant at the Royal Institution and accompanying Davy on a long European tour meeting the greats of contemporary science. At the Royal Institution he began significant research work in chemistry including synthesizing chloro-carbons, in 1825 discovering benzene, and found time to invent the earliest model of the Bunsen burner.

In 1821 Faraday published the results of his work on electromagnetic rotation. This was to lead to the creation of the electric motor. Faraday also became known as an outstanding scientific lecturer and inaugurated lecture events at the Royal Institution which continue to this day. Faradays discovery of electromagnetic induction in 1831 led to the electric transformer and generator which would produce electricity on an industrial scale. This fact did not escape Faraday himself: when Gladstone asked him what was the use of electricity Faraday replied: "One day sir, you may tax it. He continued his research into electricity, his work ultimately helping James Clerk Maxwell to construct his electromagnetic field theory.

With Faradays reputation established he was offered and accepted various official appointments as a scientific advisor. In the early 1840s Faraday became ill through overwork and although he recovered he had to slow down. Offered a knighthood he refused but did accept a grace and favour house at Hampton Court where he died on August 25 1867.

Contributors: Do you have a site related to Michael Faraday?
Supply some content for this page and we will gladly add a link to your site. Email here.