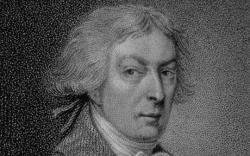 Most famous for his elegant portraits, notably The Blue Boy (1770), Gainsborough is also recognized as one of the originators of the English landscape school.

Thomas Gainsborough was baptized on May 14, 1727 in Sudbury, Suffolk. His drawing talent was recognized early on and in 1740 at the age of thirteen Gainsborough went up to London to study art. Initially his landscape paintings did not sell well but his marriage to the illegitimate daughter of the Duke of Bedford provided him with a useful annuity of £200. The family moved back to Sudbury and then on to Ipswich but it was not until they moved to Bath that Gainsborough began to attract a wealthier and more fashionable clientele. His stylish portraiture, based on his study of Van Dykes techniques, began to get him noticed and in 1769 he was invited to be one of the founding members of the Royal Academy. However, after falling out with his fellow academicians he stopped submitting his paintings there for a time. In 1773 he moved to London and a house in Pall Mall. Four years later he was back in the Academy and his reputation continued to rise, so much so that in 1780 he was asked to paint the portrait of King George III. Subsequently he received many royal commissions and became a court favourite. His great rival Sir Joshua Reynolds was the official court painter but even he generously acknowledged Gainsboroughs genius.

Very much his own man, Gainsborough did not undertake the almost obligatory Grand Tour of Italy, nor did he accept students as was conventional. In spite of his success in portraiture his personal preference was for landscape painting, and he turned increasingly towards this form as he grew older. Thomas Gainsborough died on August 2, 1788 and was buried, according to his wishes, at Kew.

Contributors: Do you have a site related to Thomas Gainsborough?
Supply some content for this page and we will gladly add a link to your site. Email here.