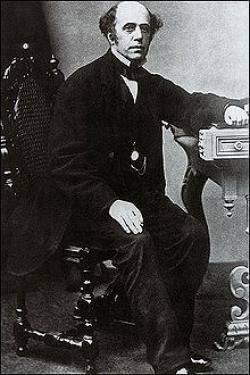 The great tourism pioneer Thomas Cook was born on November 22 1808 in Melbourne, Derbyshire. He was from a Baptist family, and after various jobs became a Baptist preacher when he was 20. It was his Baptist and Temperance connections that led to the development of his travel business: his first ever outing was for a party of more than 500 Temperance activists who travelled from Leicester to a rally in Loughborough in 1841, paying a shilling for return rail travel and food on the journey. Cook was rewarded with a percentage of the fare charged by the train company.
After several years of similar trips Cook became more adventurous: in 1845 he took a party to Liverpool from Leicester, with hotel accommodation as part of the deal  the package tour was born. The next year he went further afield, to Scotland, but his great revenue boost came from arranging huge numbers of trips to the Great Exhibition in 1851.
Cooks son John joined the firm in 1864, bringing energy and commercial acumen (Thomas went bankrupt once in his early trading days). The company moved to London, with offices in Fleet Street, branching out into sales of travel equipment on the premises.
In the age of steam Cook saw the opportunities early, arranging rail travel in Europe and then voyages to America, eventually organising a round-the-world tour. His other great innovation was travellers cheques, though Thomas Cook & Son called them circular notes.
Thomas retired from the business in 1879, returning to live in comfort in Leicestershire, his fortune made. He died on July 18 1892.

From Marcus on 28th April 2009
Left school at age of 10, became Baptist missionary. Established travel agency in London. Rail trip from Leicester to Loughborough in 1841 was first public excursion in England. Began railway tours of Europe in 1856 and in 1860s began his travel firm Thomas Cook and Sons. Established tours of USA. Agency is now a worldwide concern

Contributors: Do you have a site related to Thomas Cook?
Supply some content for this page and we will gladly add a link to your site. Email here.