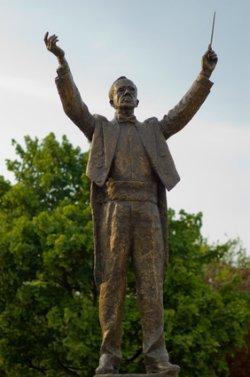 Born in Cheltenham, Gloucestershire
Born on 21st of September 1874
Died in London
Died on 25th of May 1934

Gustavus Theodor von Holst was born in Cheltenham on September 21 1874. His family of Swedish/Latvian/German descent had moved two generations previously to England. And it was a family of solid musical pedigree: his grandfather was a noted harp teacher and composer; his father an organist, choirmaster and piano teacher; his mother a singer. Holsts own daughter Imogen became a famous composer and conductor in her own right. But of course the most famous member of the family is Gustav Holst, whose Planets Suite is one of the great favourites of the British concert programme.
Holst suffered from ill-health for much of his life (when he tried to join up for WWI  during which he dropped the Teutonic von from his name - he was rejected for his lungs, eyes and digestion!), and early on he eschewed the piano for the trombone because of a weakness in his hand. At the Royal College of Music he was a contemporary of Vaughan Williams, with whom he developed a lifelong friendship, Vaughan Williams was a great fan and advocate of Holsts compositions.
In his twenties Holst to make a living played trombone in an opera orchestra and a hotel and popular concert band, something which irked him; later he obtained teaching posts at St Pauls Girls School in Hammersmith and at Morley College on Londons South Bank. His musical influences were many: for a time he was fascinated by Tudor madrigals and early English folksongs; travels in Algeria saw him studying Arab music; and Shoenberg and Stravinsky both engaged his attention for their strident modernism, which is reflected in The Planets Suite.
The Planets was sparked by his interest in astrology, something Bax had introduced him to. The piece was composed between 1914 and 1916, when he and his wife Isobel were living in Thaxted, Essex. It was premiered (five of seven parts) in 1918, and was an instant hit, though the complete piece was only played first in 1920.
A fall from the conductors podium worsened his already poor health, and his stomach problems increased, necessitating an operation. Complications followed the surgery, and he died in London on May 25 1934. Chichester Cathedral in Sussex holds his ashes.

Contributors: Do you have a site related to Gustav Holst?
Supply some content for this page and we will gladly add a link to your site. Email here.