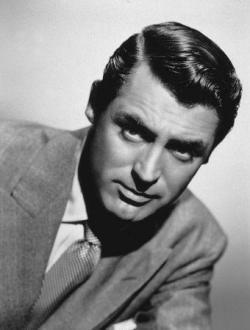 'When people tell you how young'... More

Born Archibald Alec Leach. Joined the Bob Pender stage troupe and travelled to the US in 1920, decided to stay there. Performed on the stage and had some success in Broadway comedies before moving to Hollywood in 1931 and changing his name to Cary Grant. Became one of Hollywood's top box-office attractions for several decades. Appeared in Hitchcock classics including Suspicion, To Catch a Thief and North by Northwest. Received a special Academy Award for Lifetime Achievement in 1970. Died of a cerebral haemorrhage.

Contributors: Do you have a site related to Cary Grant?
Supply some content for this page and we will gladly add a link to your site. Email here.