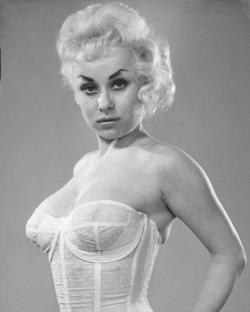 Born in Shoreditch, London
Born on 6th of August 1937

Barbara Ann Windsor, MBE was born Barbara Ann Deeks on 6th August 1937. She is an English actress best known for her roles in the Carry On Films and as Peggy Mitchell in the BBC Soap, EastEnders. She was born in Shoreditch, London, the only child of John and Rose Deeks, a costermonger and a dressmaker. However, in the documentary series 'Who Do You Think You Are' she was able to trace her family back 11 generations and discover that she was a cousin of the painter John Constable. She went to the Aida Foster School in Golders Green, and made her first West End stage appearance in the chorus of the musical, 'Love From Judy' in 1952. Her first film role was in 'The Belles of St. Trinian's' in 1954. She joined Joan Littlewood's Theatre Workshop at the Theatre Royal Stratford East and appeared in Littlewood's film 'Sparrows Can't Sing' in 1963, for which she received a BAFTA nomination for Best British Film Actress. She also appeared in the 1964 film 'Crooks in Cloisters' and in the 60s sitcoms, 'The Rag Trade' and 'Wild, Wild Women'. In 1965 she appeared on Broadway in 'Oh! What A Lovely War'. She performed on the West End stage in the early 70s in productions of 'Sing Rude a Song' and 'The Threepenny Opera' and in 1975 she toured the UK, New Zealand and South Africa in her own show, 'Carry on Barbara!'. Her rise to real fame began with the Carry On Films, starting in 1964 with 'Carry On Spying'. She appeared in nine Carry On Films all together between 1964 and 1977. From 1973 to 1975 she appeared in London's West End with several of the Carry On cast members in the revue, 'Carry On London!'. During this time she had a well publicised affair with her co-star, Sid James, whilst married to notorious gangster, Ronnie Knight, whom she was divorced from in 1985. She was married a further two times, to Stephen Hollings between 1986 and 1995 and with whom she ran a pub in Buckinghamshire, and presently to Scott Mitchell, 25 years her junior, since 2000. She was great friends with actor Kenneth Williams and was directed on stage by him in a 1981 production of 'Entertaining Mr Sloane'. She took up the role of Peggy Mitchell in BBC's EastEnders in 1994, and aside from a 2 year break due to illness, returned to the role in 2005. She published her first autobiography, 'Barbara: The Autobiography of a Cockney Sparrow' in 1990 and her second, 'All of Me' in 2000.

Contributors: Do you have a site related to Barbara Windsor?
Supply some content for this page and we will gladly add a link to your site. Email here.