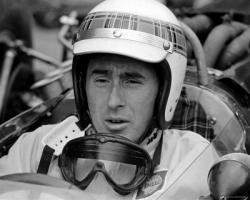 Jackie Stewart is a Scottish former professional formula one racing driver with three World Championship titles to his name. His family's connections with cars and motor racing set the young Stewart on his way as he began his working life at the family business, a Jaguar garage. His older brother Jimmy was himself an up and coming name in motor racing. Jackie Stewart was beginning to show signs of following in the family footsteps when Jimmy was injured at Le Mans. The family then decided to discourage racing and Jackie took up Skeet Shooting, narrowly missing the Olympic team of 1960.

It was not too long before Stewart was tempted back to driving round the track, however, as a customer of the family garage had him testing cars. Stewart achieved immediate success racing these cars and, after posting faster times than Bruce Mclaren whilst testing a new Formula Three car, he was offered a place racing at Formula Three level in 1964. By 1965 he had joined the British Racing Motors team at Formula 1 level, alongside Graham Hill.

Stewart raced for eight seasons at Formula 1, winning three World Championship titles out of his last five seasons. He was voted BBC Sports Personality of the Year after winning his last title in 1973. During his successful career in Formula 1 racing, he was also successful on the American racing circuit, almost winning the Indy 500 at his first attempt. It was only mechanical failure that prevented him taking a comfortable victory.

Jackie Stewart was not always popular with race track owners, being a vigorous safety campaigner. Stewart himself was lucky to survive a crash at one track where safety and medical services were so bad, that Stewart was trapped in the wreckage for over twenty minutes.

Contributors: Do you have a site related to Jackie Stewart?
Supply some content for this page and we will gladly add a link to your site. Email here.