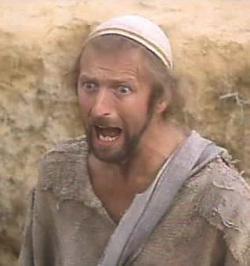 Born in Leicester, Leicestershire
Born on 8th of January 1941
Died on 4th of October 1989

Studied medicine at Emmanuel College, Cambridge. Joined Footlights, other members include Bill Oddie and Tim Brooke-Taylor. With John Cleese wrote for the BBC during the 1960s. In 1969 with Cleese he joined Michael Palin, Terry Jones, Eric Idle and American artist Terry Gilliam for Monty Python's Flying Circus. Moved to Los Angeles where he appeared on many guest shows. Returned to the UK. Died of pneumonia brought about by throat cancer.

Contributors: Do you have a site related to Graham Chapman?
Supply some content for this page and we will gladly add a link to your site. Email here.