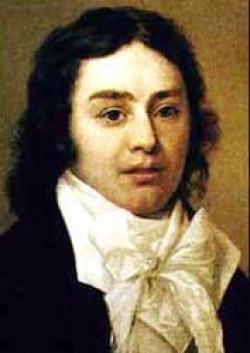 'Summer has set in with its usu'... More

The Romantic poet, critic and philosopher was born on October 21, 1772 in Ottery St Mary, Devon. His father, a vicar and headmaster, died when he was 8 years old and Thomas was sent to a charity school in London where he applied himself to the study of literature and poetry. In 1791 Coleridge entered Cambridge University and soon distinguished himself, winning a gold medal in 1792 for a poem on the slave trade. However, imbued with radical, utopian ideas he left Cambridge in 1794 without a degree.

In 1795 Coleridge met William Wordsworth and his sister Dorothy. Their friendship developed and the poets collaboration resulted in Lyrical Ballads published in 1798. This epochal work included Coleridges Rime of the Ancient Mariner and with Wordsworths lyrical poems laid the foundations of the Romantic Movement. The Romantics were inspired by nature valuing emotion and spontaneity and espoused expressing their ideals through everyday language, a far cry from the often studied and dense classicism of previous generations.

In 1800 Coleridge settled at Keswick in the Lake District to be near the Wordsworths. However his increasing marital problems and a falling out with William Wordsworth contributed to his despondency and led to an increasing use of opium. This eventual addiction began as an attempt to relieve his recurrent bouts of depression. According to Coleridge his imaginative masterpiece Kubla Khan was inspired by an opium reverie and the poem remained unfinished due to the interruption of the eponymous Person from Porlock.

Coleridge was also a renowned Shakespearian scholar, his advocacy of the Bards work forcing contemporary writers to re-evaluate it. He introduced the idealist philosophy of Emmanuel Kant to an English readership. Coleridge spent the last 18 years of his life living in the home of his doctor and friend James Gillman, a refuge from his unpleasant marital situation. During this period he continued to publish, although he seemingly failed to complete his commission to translate Goethes Faust. He died in Highgate, London aged 61 on July 25, 1834.

Contributors: Do you have a site related to Samuel Taylor Coleridge?
Supply some content for this page and we will gladly add a link to your site. Email here.