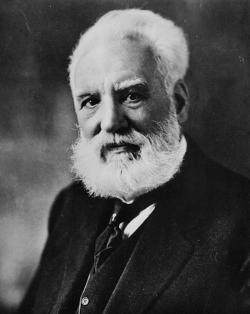 Born in Edinburgh, Edinburgh and the Lothians
Born on 3rd of March 1847
Died on 2nd of August 1922


An American inventor, educated in Edinburgh, and first worked as an elocution teacher with his father (1868-70). He opened a school in Boston in 1872 to train teachers of the deaf, devoting his time to spreading his fathers system of visible speech. On 5th June 1875 he produced the first intelligible telephonic transmission, sending a message to his assistant. In 1876 he patented the telephone, and he formed the Bell Telephone Company in 1877.

Contributors: Do you have a site related to Alexander Graham Bell?
Supply some content for this page and we will gladly add a link to your site. Email here.