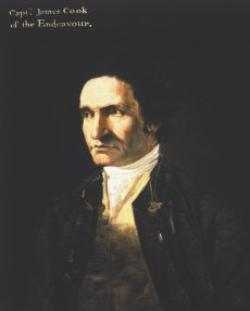 Captain James Cook was born October 27th 1728 and died February 14th 1779. He was an English seaman, explorer, navigator and cartographer, most famous for being the first European to discover Australia, New Zealand and the Hawaiian Islands. He was born in the village of Marton, Yorkshire, one of 5 children of James Cook, a Scottish farm labourer, and his wife Grace. His father's employer paid for Cook's schooling, and after many years working for his father on the farm, Cook left home at 17 and eventually took up an apprenticeship in 1746 in the merchant navy, plying coal between the Tyne and London. He was soon promoted and offered the post of Commander on the Collier Brig, 'Friendship'. However, in 1755 he decided to leave and join the Royal Navy as an Able Seaman, taking up a post on H.M.S. Eagle where he was quickly promoted to Master's Mate. In 1757 he was transferred to the H.M.S. Pembroke and was warranted as Master of the Ship and ordered to Canada where he surveyed the St. Lawrence River, helping British warships navigate that territory during the Seven Years' War. When ordered back to Britain he married Elizabeth Batts in 1762 and set up home in the Mile End Road. The couple had 6 children together. Cook's surveying skills were put to good use in the 1760s when he mapped the coast of Newfoundland, and his maps gained a reputation for accuracy. In 1768 Cook, at the bequest of the Royal Society, undertook an expedition to the Pacific in order to record the transit of Venus across the Sun. In his ship, 'Endeavour', Cook sited New Zealand in December 1769 and began exploration of its west coast. In 1770 Endeavour reached Botany Bay in Australia and Cook claimed the land for Britain. He returned to Britain via the Cape of Good Hope, arriving in July 1771. Upon his return his journals were published and he became something of a hero, gaining promotion from Master to Commander. He was again commissioned by the Royal Society, this time to search for the mythical 'Terra Australis', or 'the unknown lands of the South'. He sailed from Plymouth in July 1772 in H.M.S. Resolution and became one of the first to cross the Antarctic Circle in August 1773, taking possession of South Georgia for Britain on the way. He turned northwards and reached Tahiti in September. On 12th March 1774, Cook arrived at Easter Island and on 10th November discovered Norfolk Island. Upon his return to Britain in July 1775, Cook's discoveries put to rest the myth of 'Terra Australis'. He was then promoted to Captain and made a Fellow of the Royal Society. A third voyage was soon planned to find the Northwest Passage from the Pacific and he once again commanded H.M.S. Resolution, setting sail for Tahiti in July 1776. He arrived in Tahiti on 24th December 1777 and discovered the Christmas Islands. He then travelled north to explore the west coast of North America, discovering the Hawaiian Islands on the way in 1778, naming them the Sandwich Islands after the Earl of Sandwich, First Lord of the Admiralty. He then continued northeast to explore the west coast of North America where he mapped the entire coast from California to the Bering Strait, which proved to be impassable. He returned to Hawaii where the locals greeted him with enthusiasm and made him a God. He set sail in February 1779 to return to the Northern Pacific, but had to return to Hawaii's Big Island a few days later due to damage to his ship. Initially the locals were friendly, but when he set foot on Kealakekua Beach to retrieve a ship's boat which had been stolen, a local priest felled him with his club in order to try and show that he was a mere mortal, resulting in Cook being set upon and killed by a mob. His body was dragged away by the Hawaiians and the flesh cut and roasted from his bones, normally a tribute reserved for their chiefs and elders. Captain Charles Clerke, now in charge, collected all that remained of Cook and went on to try and finish his work and return to Britain, but was thwarted in his attempts. Captain James King completed an account of Cook's final voyage upon reaching Britain in H.M.S Resolution in October 1779.

Contributors: Do you have a site related to Captain James Cook?
Supply some content for this page and we will gladly add a link to your site. Email here.