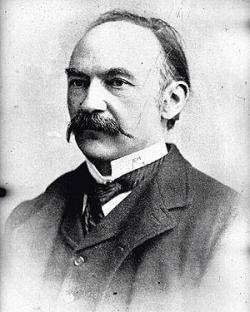 Thomas Hardy was born June 2nd 1840 and died January 11th, 1928. He was an English novelist, short story writer and poet of the naturalist movement. He was born at Higher Bockhampton, a hamlet in the parish of Stinsford in Dorset. His father was a stonemason and builder. Hardy's mother was well read and supplemented his education, which ended at the age of 16 when he became apprentice to a local architect. Hardy moved to London in 1862 where he enrolled at Kings College. He won architecture prizes from the Royal Institute of British Architects and the Architectural Association. He returned to Dorset in 1867 and spent most of his time writing. His first novel, 'The Poor Man and the Lady', failed to find a publisher and Hardy destroyed the manuscript, so only parts of it remain. However, he was encouraged to try again by his mentor and friend, Victorian poet and novelist, George Meredith. He published 'Desperate Remedies' in 1870 and 'Under the Greenwood Tree' in 1871, both anonymously. 'A Pair of Blue Eyes' was published in 1873 under his own name, and is a story drawing on the courtship of his first wife. In 1870, whilst on an architectural mission to restore the parish church of St. Juliot in Cornwall, Hardy met and fell in love with Emma Gifford. The couple married in 1874. They never had children and were estranged for much of their married life, with Emma living mostly in the attic room of their house. Emma died in 1912 and Hardy married his secretary, Florence Dugdale, 40 years his junior, in 1914. Despite their difficult marriage, Emma's death had a traumatic effect on Hardy and his 'Poems 1912-13' explore his grief. The bulk of Hardy's writing is set in the semi-fictitious county of Wessex, first introduced in his 1874 novel, 'Far From the Madding Crowd'. This was his first really successful book and the one that allowed him to give up work as an architect. He was to publish 10 more novels and short stories over the next 25 years. He and Emma lived in Sturminster Newton, where Hardy wrote 'The Return of the Native', published in 1870. In 1885 they moved to Max Gate, a house just outside Dorchester that Hardy designed and his brother built. Whilst living there he wrote, 'The Mayor of Casterbridge' in 1886, 'The Woodlanders' in 1887, and 'Tess of the D'Urbervilles' in 1891. The latter novel was intended to raise the eyebrows of the Victorian middle-classes, and attracted criticism for its sympathetic portrayal of a 'fallen woman'. Despite these criticisms, Hardy had become a literary celebrity and was awarded the Order of Merit in 1910. His novels represented two different worlds; one was a deep emotional bond with the rural way of life in the South and South West of England where he had grown up, and the other world was his awareness of the social problems, hypocrisy and unfairness in Victorian society just before the coming of the railways and the industrial revolution. 'Jude the Obscure', published in 1895, met with even stronger outcries from Victorian society for its frank treatment of sex, and was often referred to as 'Jude the Obscene'. Seen as an attack on the institution of marriage, it caused even further strain on his own marriage to Emma who was concerned that people would view it as being autobiographical. Hardy was disgusted at the way 'Tess' and 'Jude' were received, and after the publication of 'Jude the Obscure', he gave up writing novels. Hardy claimed poetry as his first love, and he published his first volume of poetry, 'Wessex Poems' in 1898, a collection of poems written over a period of 30 years. He continued to publish poetry collections until his death in 1928, although his poetry was never as well received as the novels and short stories he wrote between 1871 and 1895. Most of his poems deal with themes of disappointment in love and life, and he dictated his final poem to his wife Florence on his deathbed at Max Gate. His burial was somewhat controversial with his heart being buried alongside the grave of his first wife Emma at Stinsford in Dorset, and his ashes interred in Poets' Corner at Westminster Abbey .

Contributors: Do you have a site related to Thomas Hardy?
Supply some content for this page and we will gladly add a link to your site. Email here.