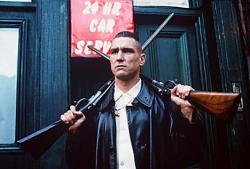 Born in Watford, Hertfordshire
Born on 5th of January 1965

Began his football career at non-league Wealdstone before moving to Wimbledon in 1986. Won the FA Cup with Wimbledon in 1988. Played for Leeds United, Sheffield United, Whitton United and Chelsea before moving back to Wimbledon in 1992. Made eight international appearances for Wales. Retired from football in 1999, turned to acting and has appeared in a number of films including Lock, Stock and Two Smoking Barrels, Snatch and Mean Machine.

Contributors: Do you have a site related to Vinnie Jones?
Supply some content for this page and we will gladly add a link to your site. Email here.