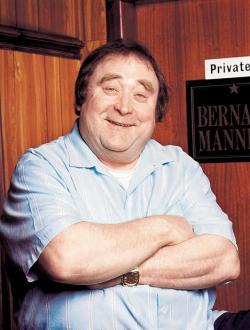 Joined the British Army and posted to Germany. On return to England he began to sing professionally and worked as a compere and stand-up comedian. His act often led to controversy as it contained material involving ethnic stereotypes and minority groups. Excluded from television he continued to work in pubs and theatres until his death.

Contributors: Do you have a site related to Bernard Manning?
Supply some content for this page and we will gladly add a link to your site. Email here.