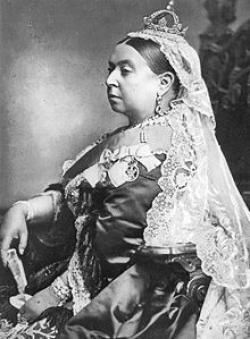 Queen Victoria was born on the 24th May 1819 at Kensington Palace in London, her father was Edward Duke of Kent, the fourth son of George III, and her mother was Victoria of Saxe-Coburg, unfortunately Victoria's father died soon after her birth, at which time she took her place in line for the throne. She ascended in 1837 at the age of 18 years of age, her coronation took place on 28th June 1838. She married her cousin Prince Albert on the 10th February 1840, and they were devoted to each other and their union produced 4 sons, Bertie, Alfred, Arthur, Leopold, and five daughters Victoria, Alice, Helena, Louise and Beatrice.

Albert assisted Victoria with her Royal duties, he was interested in the Arts and Sciences, so much so he organised the unforgettable Crystal Palace Exhibition in 1851 the innovative glass structure was erected in Hyde Park and housed 13 thousand exhibits covering everything from kitchen appliances to industrial wonders, those millions of visitors who took delight in the spectacular exhibits from across the globe, also got to enjoy concerts with the world's largest organ and even a circus. The profit gained from the exhibition that had invited many from most of the colonised world was put to good use by Prince Albert, when he opened The Science Museum, the National History Museum and of course the Victoria and Albert Museum, and not to forget the impressive Albert Hall.

Albert died in 1861 at Windsor Castle, Victoria was totally devastated and withdrew from public gaze for ten years, and entered into deep mourning, wearing black for the rest of her life. Her son Bertie took much of the pressure in attending many royal duties in her stead, this did not please the majority of the British public, and during this time her popularity reduced. She had blamed her son's risky lifestyle cohorting with actresses and his love of gambling and socialising for Albert's death, as it was just a couple of weeks after Albert had travelled to see Bertie in order to reprimand him that he met his demise.

Victoria saw many changes in this exciting and innovative era of the Industrial Revolution, she re-emerged back into the limelight and back into the hearts of the people, celebrations of her Golden, and Diamond Jubilee were embraced whole heartedly, she lived in Windsor Castle, Osborne House on the Isle of Wight, Balmoral and was the first ever monarch to reside at Buckingham Palace in London.

After the death of Prince Albert, Victoria leant heavily on John Brown who was a faithful and trusted servant, she was often called, behind closed doors of course, Mrs Brown. Queen Victoria died on the 22nd January 1901 at Osborne House on the Isle Of Wight, she had reigned for 63 years, seven months and two days, which is the longest reign of a British Monarch, which encompassed India, Canada, Australia, New Zealand, parts of Africa, Great Britain and Ireland.

Victoria was buried in a white dress and her wedding veil on 4th February 1901, after a state funeral and service at St George's Chapel, was laid to rest at Frogmore Mausoleum at Great Windsor Park, by the side of her beloved Albert.

Contributors: Do you have a site related to Queen Victoria?
Supply some content for this page and we will gladly add a link to your site. Email here.