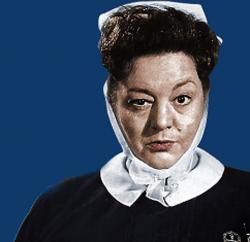 
Factory worker and Red Cross nurse during WW2. Stage debut in 1944. First of many film appearances was Green for Danger (1946). Appeared in 14 of the Carry On films. Later stage work included Twenty Minutes South (1955) Hatful of Sykes (1979).

Contributors: Do you have a site related to Hattie Jacques?
Supply some content for this page and we will gladly add a link to your site. Email here.