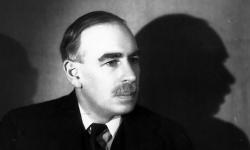 'My only regret in life is that'... More

Tall, charming and intellectually brilliant John Maynard Keynes was the greatest economist of the 20th century. He lost and made a fortune, collected modern art, married a ballerina and showed that it was possible for capitalism to save itself. Today his once unfashionable ideas are being applied with renewed vigour by world governments.

John Maynard Keynes was born in Cambridge on June 5, 1883, fittingly the same year Karl Marx died. He was educated at Eton and Cambridge where he gained a first in mathematics in 1904. Posted to the India Office he quit in 1908 for the academic life at Cambridge and the company of the Bloomsbury Group. During WWI Keynes joined the treasury and was present at the Versailles Peace Conference. Keynes pleas for seeking less harsh reparations from Germany on both economic and compassionate grounds were ignored by the victors with the terrible consequences prophesied by Keynes in his best-selling book The Economic Consequences of Peace (1919).

Keynes developed his ideas during the interwar years, advocating government intervention in the economy. He suggested that devaluing the pound would make British exports more affordable and so boost jobs. Keynes was also in favour of commissioning public works to increase employment. At the height of the Great Depression Keynes proposed lowering interest rates to boost spending and put more money into the economy. All these ideas found their fullest expression in his masterpiece, the 1936 General Theory of Employment, Interest and Money. Keynes theories were most memorably put into practice in the USA under Franklin Roosevelts New Deal.

During WWII Keynes became a director of the Bank of England and in 1942 he was made a peer. In 1944 he played a decisive role in the Bretton Woods conference which inaugurated the World Bank and the International Monetary Fund. In 1946 he was appointed by the financially crippled British government to try and negotiate a loan from America. The stress of these hellish negotiations led to a heart attack and he died at his farm in East Sussex on April 21 1946 aged only 62.

Contributors: Do you have a site related to John Maynard Keynes?
Supply some content for this page and we will gladly add a link to your site. Email here.