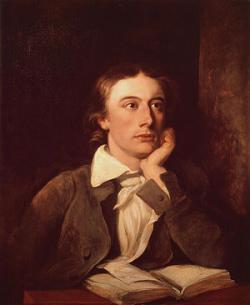 'The poetry of the earth is nev'... More

A thing of beauty is a joy forever: Its loveliness increases; it will never pass into nothingness. Keats own words are never more apt than when applied to his poetry.
John Keats was born in London on October 31, 1795. His father was a livery stable manager and Keats began his working life as a surgeons apprentice. From these unlikely beginnings John Keats was to become arguably the greatest Romantic poet of the nineteenth century. While pursuing his medical studies Keats found himself increasingly drawn towards poetry. In May 1816 his first poem was published by Leigh Hunt who was later to become his friend and champion. By the end of the same year Keats, inspired by his reading of Chapmans translation of Homer, was writing some of his finest early poems which shortly appeared in his first published volume in March 1817.

During 1817 Keats wrote Endymion, a long poem rich in colour and imagery. Published in 1818 Endymion was harshly reviewed, causing Keats to work with even greater intensity and, according to Shelley, to hasten his illness and demise. Certainly 1818 was a portentous year for Keats. The first symptoms of the tuberculosis that would kill him appeared, and his great love affair with Fanny Brawne commenced. During his courtship of Fanny Keats produced the majority of his most memorable works including: Ode on a Grecian Urn; Ode to a Nightingale; and Ode to Autumn which were published in the 1820 volume Lamia, Isabella, The Eve of St. Agnes, and other Poems

By now Keats failing health forced him to seek a warmer climate and in the same year he sailed for Italy with his friend the painter Joseph Severn. In spite of the best efforts of those close to him Keats was to die aged only 25 in Rome, in a house at the foot of the Spanish Steps, on February 1821. At his own request the words Here lies one whose name was written on water, were inscribed on his gravestone. Today he is perhaps best remembered for the immortal lines: Beauty is truth, truth beauty - that is all ye know on earth, and all ye need to know.

Contributors: Do you have a site related to John Keats?
Supply some content for this page and we will gladly add a link to your site. Email here.