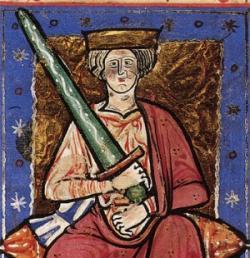 Ethelred II was born in Wessex in 968, the youngest of two sons born to King Edgar The Peaceable, so called as he was the first king to rule the whole of England since King Alred the Great. Ethelred's mother was Alfrida, who was his father's second wife, his first marriage had produced an older brother to Ethelred, Edward. His father, King Edgar died in 975, Edward being the eldest son succeeded to the throne, trouble brewed with both brothers having supporters, Edward was murdered at a young age by Ethelred's household, he was later declared a saint after several miracles were attributed to him. Ethelred ascended to the throne at a young age and his Coronation took place on the 14th April 978. He was to later acknowledge his half brother who was murdered, by way of granting a Charter to Bradford-Upon-Avon, Ethelred was an unpopular king, he ignored his advisors which resulted in a nickname that was to be written throughout history, Ethelred The Unready, or Redeless, so called because he was a weak and indecisive King and Ruler, instead of fighting and defending his realm from the invading Vikings, he chose instead, to pay them off. However, each payment made although ensured they retreated, brought another invading army whose demands grew each and every time.

Ethelred married Emma Of Normandy, their first born was eventually to rule as Edward the Confessor, but the marriage did little to endear him to his subjects, she surrounded herself with Norman attendants, popularity waned, leading to Ethelred having a severe disagreement with his brother in law, this resulted in Ethelred invading Normandy which was unsuccessful.

Perhaps one of the bloodiest days in history is to be attributed to Ethelred, St Brice's Day, when he commanded and fuelled a massacre against the Danes, killings grew, and in just one day saw thousands murdered and butchered, one victim was the sister of Sweyn Forkbeard, who was the King Of Denmark. Sweyn vowed that he would avenge his sister's brutal murder, and true to his word he invaded England in 1013. Ethelred knew when he was beaten and fled to Normandy in exile. However Sveyn died in a matter of weeks, Ethelred was persuaded to return to England's shores, which he did, yet he was destined to rule for only a short time before Sweyn's son, Canute returned to England. Ethelred died on April 23rd 1016 and was later buried in the old St Paul's Cathedral. He was succeeded by his son Edmund, who was to rule as Edmund II, Ironside. Ethelred's wife Emma later married Canute, king of Denmark, and England

Contributors: Do you have a site related to Ethelred II (the unready)?
Supply some content for this page and we will gladly add a link to your site. Email here.