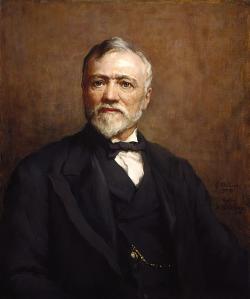 'Fortunate indeed the child who'... More

Andrew Carnegies life was the ultimate rags-to-riches story. Born in Dunfermline on November 25 1835 into a family of weavers, when he died on August 11 1919 he was one of the worlds richest men. But unlike most such he was also a genuine philanthropist, giving away much of his fortune.
In 1848 Carnegies family moved to America, setting up home in Pittsburgh. He got a job as a telegraph boy with The Pennsylvania Railroad Company, where he had the fortune to work for a perceptive boss, Thomas Scott, who helped him greatly. Carnegie rose rapidly through the company ranks in his teens. A move to Washington followed as Scott became Assistant Secretary of War.
Carnegies initial fortune was built on shrewd investment: in Pullman coaches for the railway; in iron and steel businesses as the railways expanded; in an oil field where his stake was multiplied more than 20 times in a year.
But his eventual vast wealth was built on steel. Carnegie returned to Scotland regularly, and was one of the first to spot the significance of Henry Bessemers blast furnace. He invested at various stages of the steel process, from ore-mining to rolling mills and in 1892 combined those companies into Carnegie Steel. In 1901 this was sold to JP Morgan, Carnegie reaping $225 million for his shares.
Carnegie had given generously since he first established his fortune: Dunfermline benefitted from a public baths and library in 1879 and 1880; and he provided £50,000 to help set up a university in Birmingham in 1899; after he retired in 1901 to live in Skibo Castle in Sutherland his giving accelerated, endowing various universities and many libraries in Britain, the USA, Canada, Australia and New Zealand, something his incredible wealth  more than $200 billion in contemporary terms  allowed him to do.
A republican, Carnegie purchased several British newspapers which then promoted his anti-monarchist views. In spite of this he was on good terms with many establishment figures here  Gladstone and Matthew Arnold among them. He also spent large sums on institutions and publications promoting world peace, and was a prominent anti-imperialist. He died in America aged 84, widely regarded as probably the second wealthiest commoner in history.

Contributors: Do you have a site related to Andrew Carnegie?
Supply some content for this page and we will gladly add a link to your site. Email here.