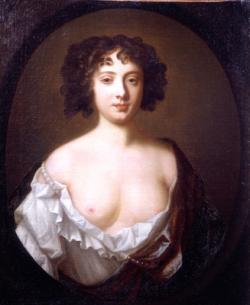 Born in Hereford, Herefordshire
Born on 2nd of February 1650
Died on 14th of November 1687

Though the place of her birth is not known  Oxford, Hereford and London all vying for the honour  the date is sure, as like other women of fashion in her time Nell Gwynn had an astrological chart done for her date of birth: February 2 1650. Hers was to be a short life, as she died after two massive strokes aged just 37, but with an enormous amount packed into it.
As with her place of birth her childhood is speculated on rather than sure: her mother ran a brothel in London, and many think Nell (christened Eleanor) was probably prostituted there. She is supposed to have earned her corn by selling herring and even turnips in the streets of London, graduating to selling oranges at what would soon become The Theatre Royal Drury Lane. Selling oranges was not the only activity involved in the trade  she probably acted as go-between or pimp for actresses, and again sold her own body in all likelihood.
The Restoration brought the innovation of actresses on the London stage, and Nell managed, in spite of her illiteracy, to join their ranks and become one of the most celebrated comediennes of the time, featuring in bawdy comedies often in saucy breeches roles, acting in plays by John Dryden and George Villiers among others. Nell came to the attention of Lord Buckhurst and was soon and briefly his kept mistress.
In 1668 Nell became the mistress of Charles II, provided with a house in Pall Mall. She gave birth to two sons; the first acknowledged and eventually made Duke of St Albans and the second almost certainly the kings too. Charles died in 1685, and Nell only survived him by two years, expiring on November 14 1687, the one-time orange seller having a funeral at which the Archbishop of Canterbury preached.

Contributors: Do you have a site related to Nell Gwynn?
Supply some content for this page and we will gladly add a link to your site. Email here.