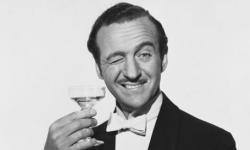 'I always knew that if all else'... More

In our age of indistinguishable dullard celebrities we can but look back with pleasure and amazement at the life and times of David Niven: actor, soldier, writer, joker, lover and even television company boss.
Born to a well-to-do family of Scots ancestry in London in 1910, Niven set the tone for his later life by being expelled from prep school. This meant that (after reform school) he attended the then new Stowe rather than Eton as his family had hoped.
Niven went on to Sandhurst and the regular army, very much the officer and gentleman. If not a rebel he was a natural joker, something that didnt endear him to authority, and he eventually slipped out of a detention cell, resigned his commission while en route to the USA and failed careers in sales and rodeo promotion before finding his way to Hollywood in 1934. His good looks and suavity were perfect for pre-war roles in films like The Prisoner of Zenda and The Charge of the Light Brigade.
Though often of highly dubious veracity  he had a penchant for borrowing the experiences of friends as if they were his own - his hilarious autobiographical writings The Moons a Balloon and Bring on the Empty Horses give a wonderful flavour of his adventures, his lifestyle, and the glamorous people he mixed with in Tinseltown.
In spite of his earlier failed military career Niven re-enlisted in 1939. He acted in The First of the Few and The Way Ahead while serving, but also saw action in Normandy and Germany, rising to the rank of Lt-Colonel when hostilities ceased.
Back in Hollywood he now became an A-List actor, starring in classic movies like A Matter of Life and Death , Enchantment, Around the World in 80 Days, The Elusive Pimpernel, the original Casino Royale and of course The Pink Panther . In 1958 he won the best actor Oscar for the Terence Rattigan scripted Separate Tables, a piece with a tone that suited his style perfectly.
He was also a success in television as both actor and entrepreneur, and as a natural raconteur was a valued guest on talk shows like Parkinson in the seventies and early eighties. Niven died of Lou Gehrigs disease in 1983.

Contributors: Do you have a site related to David Niven?
Supply some content for this page and we will gladly add a link to your site. Email here.