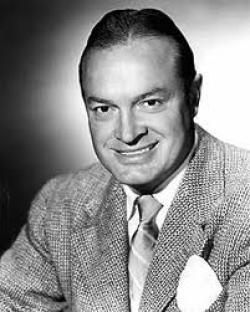 'There will always be an Englan'... More

Bob Hope (or as he then was, Leslie Townes Hope) was born in Eltham in 1903, his family emigrating to the USA in 1908. After working as a butcher among other manual jobs he learned to dance and entered showbiz as a hoofer, quickly graduating to comedy on Broadway. He made scores of movies, most memorably the Road to... series with Bing Crosby; appeared equally often in stage shows; was one of the earliest TV stars (having had a very popular radio show for years); hosted the Oscars more often than any other star; and appeared in USO shows to support American troops from WWII to The First Gulf War. He was married (though how officially is unclear) for nearly 70 years, a fact that didnt prevent him from having many affairs, which must have been good for his health as he lived past his 100th birthday.

Contributors: Do you have a site related to Bob Hope?
Supply some content for this page and we will gladly add a link to your site. Email here.