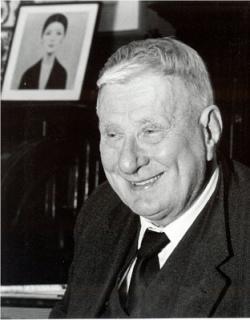 Born in Manchester, Greater Manchester
Born on 1st of November 1887
Died on 23rd of February 1976

Famed for its grim use of toned-down colour and match-stick figures, the work of L.S. (Laurence Stephen) Lowry left a snapshot of North-West Britain in an era of flat caps and smoky factory chimneys. If the stylishly futuristic Salford Quays gallery and entertainment venue named after him and housing a large collection of his work is anything to go by that era is long past.

Born on November 1 1887 on Barrett Street, Stretford, Lowry decided to paint what he saw, the workers of Pendlebury where his family moved, football crowds in Bolton, mills, street scenes and other everyday snippets of northern life as it then was. Choosing such subject matter set him apart from his contemporaries, as did his style, which owed much to the impressionists, though rather incongruously his favourite artist was the pre-Raphaelite Rossetti.

Not all of Lowrys work depicted gritty inner-city existence. He produced some of his most celebrated pieces, seascapes among them, whilst visiting one of his favourite holiday spots, Berwick-upon-Tweed. Lowry painted Berwicks pier and the sea beyond it, the market place, its cobbled streets, and today a Lowry Trail draws visitors to the town. He also regularly visited Sunderland, staying at the Seaburn Hotel there, and in later life stayed with friends in Southampton and Cleator Moor, always painting.

From lowry lover on 7th May 2009
One of our best loved painters, after studying at Manchester college of Art, went on to produce numerous pictures of the Lancashire industrial landscape. Done in a deliberately naïve fashion, and incorporating his famous matchstick people. The largest collection of his work is housed at The Lowry in Salford Quays.

Contributors: Do you have a site related to L S Lowry?
Supply some content for this page and we will gladly add a link to your site. Email here.